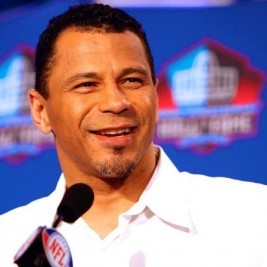 Businesses, Non-profit organizations, event planners and companies across the country have worked closely with our booking agents to hire Rod Woodson for a speaking engagements, guest appearances, product endorsements and corporate events. Many of those same clients have continued to turn to our speakers bureau as we can easily align Rod Woodson’s availability with their upcoming seminar, gala, annual conference, corporate function, and grand opening. Our close relationship with Rod Woodson’s booking agent and management team further enables us to provide inquiring clients with Rod Woodson’s speaking fee and appearance cost.

If your goal is to hire Rod Woodson to be your next keynote speaker or to be the next brand ambassador our celebrity speakers bureau can assist. If Rod Woodson’s booking fee is outside your companies budget or your unable to align with his appearance availability, our booking agents can provide you a list of talent that aligns with your event theme, budget and event date.

Rod Woodson began playing football as a boy in Fort Wayne, Indiana. After graduation from Snider High School in 1983, Rod was awarded a full scholarship to Purdue University. He starred at Purdue, winning All Big Ten and All American honors in 1985 and 1986. Woodson also starred in track, holding the NCAA record in the 60m Hurdles for ten years.

Woodson's career took a somewhat nomadic turn after free agency from Pittsburgh. Although he has remained to raise his family in Pittsburgh he has hopped between three additional franchises, becoming one of the few modern cornerbacks to successfully make a transition to the safety position. Woodson signed with San Francisco for the 1997 season, Baltimore for the years 1998 to 2001, and the Oakland Raiders for 2002 and 2003.

Woodson was released by the Oakland Raiders on July 27, 2004 after failing his team physical. He has since officially retired, and has stated to the press that he has no desire to resume his career. His replacement at free safety for the Raiders was Stuart Schweigert, who coincidentally, broke Woodson's career interception record at Purdue.

For his excellence on the field, Woodson has been named to the Pro Bowl eleven times, a record for a defensive back. Woodson was named 1993's NFL Defensive Player of the Year by the Associated Press. In 1994, he was named to the NFL's 75th Anniversary Team. The Sporting News and College Football News have also honored him as one of the 100 greatest players of the 20th century. It is not a question whether Woodson will make it into the Hall of Fame in Canton upon eligibility, but whether he will choose to be inducted as a Pittsburgh Steeler, where he spent most of his career, or a Baltimore Raven, where he obtained his Super Bowl championship ring.

He now works for the NFL Network on "NFL TOTAL ACCESS" with Rich Eisen.

Since 1994, Woodson has operated an annual youth football camp, the Woodson/Fabini Football Camp, on the grounds of his former high school. He is also a partner in Woodson Motorsports, a BMW motorcycle dealership and repair shop in Fort Wayne.

Woodson splits his time between NFL Network studios in Los Angeles and his home in Pleasanton, California.