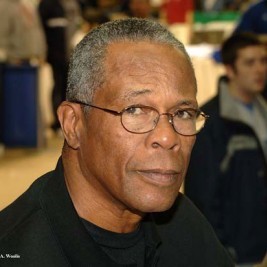 Businesses, Non-profit organizations, event planners and companies across the country have worked closely with our booking agents to hire Rod Carew for a speaking engagements, guest appearances, product endorsements and corporate events. Many of those same clients have continued to turn to our speakers bureau as we can easily align Rod Carew’s availability with their upcoming seminar, gala, annual conference, corporate function, and grand opening. Our close relationship with Rod Carew’s booking agent and management team further enables us to provide inquiring clients with Rod Carew’s speaking fee and appearance cost.

If your goal is to hire Rod Carew to be your next keynote speaker or to be the next brand ambassador our celebrity speakers bureau can assist. If Rod Carew’s booking fee is outside your companies budget or your unable to align with his appearance availability, our booking agents can provide you a list of talent that aligns with your event theme, budget and event date.

An immigrant to New York City at the age of 17, Carew was an All-Star in all but his final 1985 season and the American League Rookie of the Year in 1967. In 1972, amazingly enough, Carew led the American League in batting, without hitting a single home run. He won seven batting titles, including his best overall season, 1977 in which his .388 batting average was the highest in baseball since Ted Williams hit .406 in 1941. Though it by far was the closest anyone other than Williams had come to hitting .400 or more since the actual 1941 feat, it did not get the media attention that George Brett's attempt did three years later because unlike Brett's run he was "only" hitting about .350 or so most of the season until he hit a "hot streak" in September and his average started inching towards .400 during the last two weeks of the season. He also won the AL's Most Valuable Player award that year. In addition, he is one of only two players to lead Major League Baseball in batting average in three consecutive years, doing so from 1973 through 1975.

Originally a second baseman, Carew moved to first base in 1975 to lengthen his career. Frustrated by the Twins' inability to keep its young stars, Carew announced his intention to leave the team in 1979. He was then traded to the Angels for four players.

Sometimes a target of racism, Carew received death threats when he announced his intention to marry a Jewish woman. Many sources have long claimed that he converted to Judaism when he married his wife and in this sense he is sometimes compared to Sammy Davis Jr. as a famous "Jewish convert of color"; however, this is incorrect. He has never undergone a formal conversion ceremony nor publicly identified himself as an adherent of Judaism, however, his children were raised Jewish and it is assumed that as such he partakes in some Jewish activities such as lighting Hanukkah candles or organizing Passover Seders with his family. Nonetheless, the story about him converting to Judaism is an urban myth. He is named in one of Adam Sandler's Hanukkah Songs as "Hall of Famer Rod Carew!" He is also referenced in the Beastie Boys 1994 single "Sure Shot" with the line "And I got mad hits like I was Rod Carew."

Carew joined the 3,000 hit club in his final year, finishing with 3,053 hits and a lifetime batting average of .328. Carew was elected to the Baseball Hall of Fame in 1991, his first year of eligibility. He was the 22nd player so elected. In 1999, he ranked Number 61 on The Sporting News' list of the 100 Greatest Baseball Players, and was nominated as a finalist for the Major League Baseball All-Century Team.

When Carew's 18-year-old daughter, Michelle, fell victim to leukemia, Carew made national headlines again. Her Panamanian-Jewish ethnic mix lowered the likelihood of finding a suitable donor for a bone marrow transplant; in spite of Carew's national pleas, she died in April 1996 before a donor could be located.

Following his retirement, Carew has worked as a hitting coach, including for the Angels and for the Milwaukee Brewers.

His number 29 has been retired by both the Minnesota Twins and the Los Angeles Angels of Anaheim.