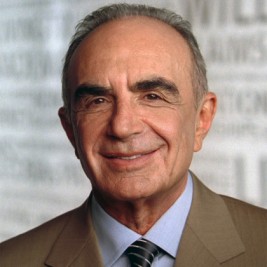 Businesses, Non-profit organizations, event planners and companies across the country have worked closely with our booking agents to hire Robert Shapiro for a speaking engagements, guest appearances, product endorsements and corporate events. Many of those same clients have continued to turn to our speakers bureau as we can easily align Robert Shapiro’s availability with their upcoming seminar, gala, annual conference, corporate function, and grand opening. Our close relationship with Robert Shapiro’s booking agent and management team further enables us to provide inquiring clients with Robert Shapiro’s speaking fee and appearance cost.

If your goal is to hire Robert Shapiro to be your next keynote speaker or to be the next brand ambassador our celebrity speakers bureau can assist. If Robert Shapiro’s booking fee is outside your companies budget or your unable to align with his appearance availability, our booking agents can provide you a list of talent that aligns with your event theme, budget and event date.

Shapiro had successfully defended athletes such as Jose Canseco, Darryl Strawberry, and Vince Coleman. Despite his experience, Shapiro's cases were often ones decided without trial on undisputed facts. The only issue in many of these cases was punishment, and on this issue Shapiro proved a masterful bargainer. His ability at crafting a deal won Shapiro the honorific title of "Defense Counsel of the Year" for 1994. Shapiro received a note from Judge Lance Ito, who called his award "well deserved and overdue." Shapiro told Bailey that he approved of Ito as judge of the Simpson case "because Lance Ito loves me."

Robert Shapiro replaced Howard Weitzman as Simpson's defense attorney. Shapiro's initial dealings with the LAPD were based on trust. Shapiro arranged that if Simpson was to be charged with murder, the LAPD would not to arrest him, but rather that Simpson would agree to a surrender. When this failed, so did the trust between Shapiro and the LAPD.

Always a fan of the media, Shaprio held numerous press conferences, often to discuss the defense team's strategy, and to elicit support from the public.

Determined to hold on as lead counsel despite the powerful attorneys he employed for Simpson's defense, Shapiro struggled to keep his position. Finally realizing that he had no chance of remaining in charge, Shapiro became upset by decisions made by members of the defense team without his approval.  Relations among defense team members were further strained by press leaks by investigators hired by Bailey.  These leaks generally portrayed Shapiro in an unfavorable light.  One such leaked story suggested that Shapiro had hired a secretary who's sole duty was to cut articles from newspapers which had Shapiro's name listed in them.

His disdain for meeting with clients in jail distanced Shapiro from Simpson and allowed Cochran to take his place as lead counsel. Shapiro never recovered from his loss of status, often turning on his co-counselors with criticism.

In 1994, at the same time as the Simpson trial, Bailey and Shapiro represented one of the biggest marijuana dealers in the world.  As part of a plea bargain, the client agreed to turn over his assets to the U.S. Government.  Included in his assets were a large amount of stock, which increased in value from six million to twenty million between the time of the plea and when the government  attempted to collect.  As the deal was not put in writing, a federal judge held a hearing to determine the terms of the arrangement.  The lead witness for the government was Shapiro, who testified that his understanding of the agreement was that the government was entitled to the appreciated portion of the stock. When Bailey did not produce the stock or the cash equivalent, the judge threw Bailey in jail.  After forty-four days in a federal detention center, Bailey gave up his claim to the stock.  Shapiro told friends with a smile that he paid his own way to Florida to testify against Bailey.

After the trial, Shapiro's told reporters that he viewed with disgust some of the tactics employed by the defense team. Shapiro tried to distance himself as much as possible from these tactics. Shapiro said in a long-promised interview with ABC's Barbara Walters, "not only did we play the race card, we dealt it from the bottom of the deck.".