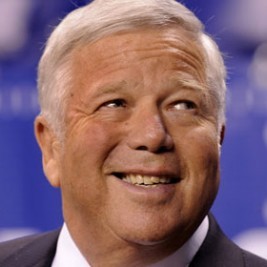 Businesses, Non-profit organizations, event planners and companies across the country have worked closely with our booking agents to hire Robert Kraft for a speaking engagements, guest appearances, product endorsements and corporate events. Many of those same clients have continued to turn to our speakers bureau as we can easily align Robert Kraft’s availability with their upcoming seminar, gala, annual conference, corporate function, and grand opening. Our close relationship with Robert Kraft’s booking agent and management team further enables us to provide inquiring clients with Robert Kraft’s speaking fee and appearance cost.

If your goal is to hire Robert Kraft to be your next keynote speaker or to be the next brand ambassador our celebrity speakers bureau can assist. If Robert Kraft’s booking fee is outside your companies budget or your unable to align with his appearance availability, our booking agents can provide you a list of talent that aligns with your event theme, budget and event date.

Robert K. Kraft was born June 5, 1941 and is an American business magnate. He is the Chairman and Chief Executive Officer of The Kraft Group, a diversified holding company with assets in paper and packaging, sports and entertainment, real estate development and a private equity portfolio. His sports holdings include the National Football League's New England Patriots and Major League Soccer's New England Revolution, and Gillette Stadium. A Patriots fan since their American Football League days, Kraft has been a season ticket holder since 1971, when the team moved to the then-Schaefer Stadium. In 1985, Kraft bought an option on the parcel adjacent to the stadium. The option would be the first in a series of steps which would culminate nearly a decade later in his eventual ownership of the team. Later, in 1988, Kraft outbid several competitors to buy the stadium out of bankruptcy court from Billy Sullivan for $25 million. The purchase included the stadium's lease to the Patriots – which would later provide Kraft leverage in purchasing the team.

In 1992, St. Louis businessman, James Orthwein, purchased the Patriots from Victor Kiam, who was facing bankruptcy and owed Orthwein several million dollars. For the next two years, rumors of a Patriots move to St. Louis were rampant, based on the fact that Orthwein wanted to return the NFL to his hometown, which had lost the Cardinals to Arizona in 1988. In 1994, Orthwein offered Kraft $75 million to buy out the remainder of the team's lease at the Foxboro Stadium, which, if Kraft agreed, would free Orthwein to move the Patriots to St. Louis. However, Kraft rejected the offer and made a counter-bid—a then NFL-record $175 million for the outright purchase of the Patriots, an offer Orthwein accepted. The day after the NFL approved the sale in February 1994, Patriots fans showed their appreciation by purchasing almost 6,000 season tickets en route to selling out every game for the first time in the team's 34-year history. Every home game—regular season, postseason, and even preseason—has been sold out since. The Patriots responded by putting together a seven-game winning streak to end the 1994 season, making the playoffs for the first time since 1986. In 1996 Kraft founded the New England Revolution, a charter member of Major League Soccer which began playing alongside the Patriots at Foxboro. After the failure of a number of stadium plans that included either revamping the area in Foxboro or relocating to Boston or a town near Boston, the Patriots nearly moved to Hartford, Connecticut, in 1999. Plans were also discussed about moving the team to Providence, Rhode Island. They reached an agreement with then-Connecticut Governor John Rowland to move to a new stadium intended to be the cornerstone of downtown redevelopment. After Rowland lobbied the Connecticut legislature to approve state funds for the stadium the Patriots were given another opportunity to resume negotiations with the Massachusetts legislators who had initially balked on paying for site improvements for a new stadium in Foxboro. At the last minute the Massachusetts legislature approved the subsidies and hurdles were cleared for what became Gillette Stadium in the Patriots' longtime home of Foxboro. The $350 million stadium, privately financed by Kraft, opened in 2002 as CMGI Field, before financial difficulties for CMGI resulted in Gillette taking over naming rights.

In 2007, Kraft announced plans to develop the land around Gillette Stadium, creating a $375 million open-air shopping and entertainment center called Patriot Place. The development opened in stages through 2007, 2008, and 2009 and included "The Hall at Patriot Place," a multi-story museum attached to the stadium, and the "CBS Scene," a CBS-themed restaurant. The Patriots appeared in Super Bowl XX under their original owners, the Sullivans. Yet, this was one of only six playoff appearances in 33 years. However, since Kraft bought the team, they have made the playoffs 12 times in 17 years. They have also appeared in more playoff games than in the team's first 34 seasons combined. The team won AFC East titles in 1996, 1997, 2001, 2003, 2004, 2005, 2006, 2007, 2009, 2010, 2011 and 2012; they represented the AFC in the Super Bowl in 1996, 2001 2003 2004 2007 and 2011. The Patriots finished the 2003, 2004, and 2010 seasons with identical 14–2 regular-season records, and also finished the 2007 regular season undefeated before losing to the New York Giants in Super Bowl XLII. Kraft was principally involved in the 2011 NFL labor negotiations. He was credited for being a bridge-builder who brought the two sides closer together and a catalyst in negotiating a historic 10-year agreement. The deal was announced on Monday, July 25, 2011, while Kraft was still mourning the death of his "sweetheart", Myra Kraft, his wife of 48 years, who had died only five days before. In what became an iconic image of the CBA resolution, NFLPA representative and Indianapolis Colts center Jeff Saturday praised Kraft for his role in the negotiations, stating, "without him, this deal does not get done ... He is a man who helped us save football." In Kraft's first 18 seasons as team owner the Patriots have won 193 regular season games and 19 playoff games. The team reached a milestone 200th win under Kraft ownership with their third win of 2011, a 30-19 win against the Oakland Raiders.