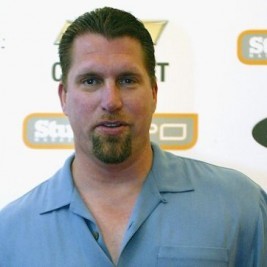 Businesses, Non-profit organizations, event planners and companies across the country have worked closely with our booking agents to hire Rob Dibble for a speaking engagements, guest appearances, product endorsements and corporate events. Many of those same clients have continued to turn to our speakers bureau as we can easily align Rob Dibble’s availability with their upcoming seminar, gala, annual conference, corporate function, and grand opening. Our close relationship with Rob Dibble’s booking agent and management team further enables us to provide inquiring clients with Rob Dibble’s speaking fee and appearance cost.

If your goal is to hire Rob Dibble to be your next keynote speaker or to be the next brand ambassador our celebrity speakers bureau can assist. If Rob Dibble’s booking fee is outside your companies budget or your unable to align with his appearance availability, our booking agents can provide you a list of talent that aligns with your event theme, budget and event date.

Robert Keith Dibble is an American former Major League Baseball pitcher and television analyst. Between 1988 and 1995, Dibble played for the Cincinnati Reds, Chicago White Sox and Milwaukee Brewers. He was a two-time All-Star who recorded 89 saves during his career. Since retiring as a player, Dibble has held several roles in sports television broadcasting. Dibble was drafted by the Cincinnati Reds in the first round of the 1983 amateur draft, and he made his debut with the Reds on June 29, 1988. On June 4, 1989, Dibble struck out three batters on nine pitches in the eighth inning of a 5–3 win over the San Diego Padres. Dibble is one of 41 pitchers in Major League history to accomplish the nine-pitch/three-strikeout half-inning, a feat known as an immaculate inning. He was an MLB All-Star in 1990 and 1991, and was the 1990 NLCS Most Valuable Player. In 1990, Dibble and the Reds won the World Series by beating the Oakland Athletics in four consecutive games. Dibble recorded his 500th career strikeout in fewer innings—368—than any other pitcher in modern baseball history up to that point. On March 27, 2014, Dibble became the host of the 3-7PM sports talk show on WUCS 97.9 FM and WAVZ 1300 AM in the ESPN stations in Hartford and New Haven, CT respectively. He joined interim host Paul Nanos who filled in when Mike Bower’s contract was not renewed. Up until the end of October the show was billed as “The Rob Dibble Show with Paul Nanos”. In October, the show was renamed “The Rob Dibble Show”.