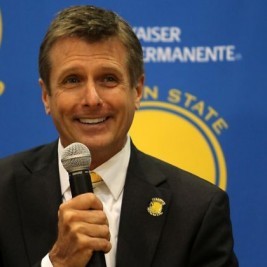 Businesses, Non-profit organizations, event planners and companies across the country have worked closely with our booking agents to hire Rick Welts for a speaking engagements, guest appearances, product endorsements and corporate events. Many of those same clients have continued to turn to our speakers bureau as we can easily align Rick Welts’s availability with their upcoming seminar, gala, annual conference, corporate function, and grand opening. Our close relationship with Rick Welts’s booking agent and management team further enables us to provide inquiring clients with Rick Welts’s speaking fee and appearance cost.

If your goal is to hire Rick Welts to be your next keynote speaker or to be the next brand ambassador our celebrity speakers bureau can assist. If Rick Welts’s booking fee is outside your companies budget or your unable to align with his appearance availability, our booking agents can provide you a list of talent that aligns with your event theme, budget and event date.

One of the most respected business executives in the NBA, with over 36 years of experience in the league, Rick Welts is the president and chief operating officer of the Golden State Warriors. Welts oversees all business-related operations for the Warriors, reporting directly to the organization's Co-Managing Partners, Joe Lacob and Peter Guber. Welts, 58, brings to the Warriors an impressive and all-encompassing résumé that includes a myriad of different capacities spanning virtually every level of an NBA operation. Most recently, he spent nine years with the Phoenix Suns, serving the organization as president and chief executive officer for the last two seasons.

During his tenure in Phoenix, which began as president and chief operating officer in July of 2002, the Suns enjoyed success on all levels, including on the court, where the club registered five 50-plus win seasons and advanced to the Western Conference Finals in 2005, 2006 and 2010. Welts' responsibilities in Phoenix included the supervision of all business operations for the Suns, while also overseeing the team's interest in the management of the US Airways Center and the WNBA's Phoenix Mercury. The Mercury won the WNBA Championship in 2007 and 2009. Prior to joining the Suns, Welts enjoyed a successful 17-year stint at the NBA league office in New York, where he ascended through the ranks to eventually become the league's third-in-command as the executive vice president, chief marketing officer and president of NBA Properties.

In addition to his overall contributions to the revitalization of the league's image and popularity, his notable accomplishments at the NBA include the creation of NBA All-Star Weekend in 1984 – a model that subsequently became a fixture in both MLB and the NHL – along with the creation of a marketing program with USA Basketball for the 1992 Olympic “Dream Team.” Along with Val Ackerman, Welts was named “Marketer of the Year” by Brandweek in 1998 for his role in launching the WNBA. During his time at the NBA office, he received multiple promotions and supervised a wide-range of departments, including corporate sponsorship and media sales, consumer products, international business activities, media relations, community relations, team services, special events and creative services. Welts also played a prominent role in the organization of preseason games in foreign countries and the eventual opening of international NBA offices in Australia, Asia, Europe, Mexico and Canada. A native of Seattle, Washington, Welts began his NBA career in 1969, at the age of 16, as a ball boy with the Seattle SuperSonics.

He spent 10 years with his hometown team serving a number of roles, including as the team's director of public relations during back-to-back appearances in the NBA Finals and the SuperSonics lone NBA Championship in 1979. In 2006, he was the recipient of the annual Splaver/McHugh “Tribute to Excellence Award,” which is given annually by the NBA Public Relations Directors' Association to a current or former member of the NBA PR family who has demonstrated an outstanding level of performance and service during their NBA career. After leaving the SuperSonics, the University of Washington product spent the following three years at Bob Walsh & Associates, a sports marketing firm in the Seattle area. His non-NBA résumé also includes serving as president of Fox Sports Enterprises. In May of 2011, in a front page story in the New York Times, Welts became the highest ranking executive in men's professional team sports to publicly acknowledge he is gay. Four months later, he was presented with a United States Tennis Association 2011 ICON Award at the US Open in New York City. The ICON Award recognizes and celebrates those who have had a positive impact on diversity and inclusion in the sports industry and society.