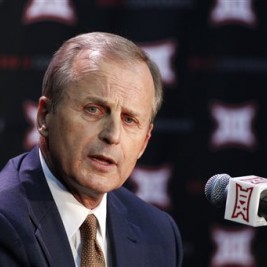 Businesses, Non-profit organizations, event planners and companies across the country have worked closely with our booking agents to hire Rick Barnes for a speaking engagements, guest appearances, product endorsements and corporate events. Many of those same clients have continued to turn to our speakers bureau as we can easily align Rick Barnes’s availability with their upcoming seminar, gala, annual conference, corporate function, and grand opening. Our close relationship with Rick Barnes’s booking agent and management team further enables us to provide inquiring clients with Rick Barnes’s speaking fee and appearance cost.

If your goal is to hire Rick Barnes to be your next keynote speaker or to be the next brand ambassador our celebrity speakers bureau can assist. If Rick Barnes’s booking fee is outside your companies budget or your unable to align with his appearance availability, our booking agents can provide you a list of talent that aligns with your event theme, budget and event date.

Rich Barnes was born July 17, 1954 and is the current head coach of the Tennessee Volunteers men's basketball team. He coached Texas from 1998 to 2015, taking the team to the NCAA Tournament at the conclusion of seventeen seasons, including a Final Four appearance led by T. J. Ford in 2003. Barnes previously coached at George Mason University, Providence College, and Clemson University. He is a 1977 graduate of Lenoir-Rhyne College where he was a member of the men's basketball team.

Barnes' success at Texas, a traditional football powerhouse, sparked interest in college basketball at the university and throughout the state. Hired in April 1998, the basketball program immediately displayed Barnes' impact. Despite playing with just seven scholarship players for the majority of the 1998–99 season — and opening the season with a 3-8 record — the Longhorns won 16 of their final 21 games, winning the regular season Big 12 conference championship by a two-game margin, and finishing the year at 19-13 and in the NCAA Tournament. Barnes received his third Big 12 Coach of the Year award on March 10, 2008.

At Texas, Barnes had great regular season success with 400+ wins and transformed the school into one of the top college basketball programs in the nation. He also led Texas to their first #1 ranking in 2010. However, he has won only one post-season conference tourney championship (Providence, 1994 Big East) in his 21 years as a collegiate head coach. He has an overall record of 20–20 (.500) in the NCAA tournament (18-14 at Texas). In nine of his fourteen years at Texas, the Longhorns went on to lose to a lower seed in the NCAA Tournament.

As for his coaching tree, Rick Barnes has had four of his assistants hired to head coaching gigs with Larry Shyatt coaching Wyoming (formerly Clemson), Dennis Felton at Western Kentucky and Georgia, before being fired, Frank Haith at Tulsa (formerly Miami) and Missouri, and Ken McDonald going to Western Kentucky.

In 2007 Barnes made a cameo appearance in the NBC television series Friday Night Lights as a recruiter for the fictional school TMU.