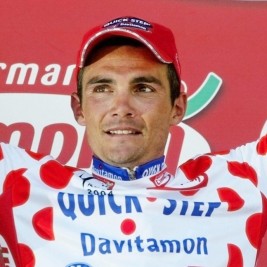 If your goal is to hire Richard Virenque to be your next keynote speaker or to be the next brand ambassador our celebrity speakers bureau can assist. If Richard Virenque’s booking fee is outside your companies budget or your unable to align with his appearance availability, our booking agents can provide you a list of talent that aligns with your event theme, budget and event date.

However, in 1998 team Festina was shattered by a doping scandal after health assistant Willy Voet was arrested with large quantities of prescription drugs and illegal drugs used for doping. Richard Virenque denied doping himself intentionally, while Willy Voet charged that he was perfectly conscious of what he was doing, and even participated in trafficking between professional cyclists. Virenque claimed that all this had happened, in his own words, "" l'insu de mon plein gr". Voet also wrote a book Breaking the Chain in which he clearly identified Richard Virenque as an unrepentant doper in full knowledge of his own abuses.

Virenque was highly criticized by the media and satirists for his stubborn denial in the face of increasing evidence and his pretense of having been doped without his knowledge. The Les Guignols de l'Info show portrayed him repeating "" l'insu de mon plein gr"", and this phrase soon passed into French popular culture as a sign of hypocritical denial.

In March 2000, Richard Virenque went to trial as a witness with much of the former Festina team in Lille. After initially denying that he had doped himself, he confessed to having doped himself. After serving a suspension, he eventually returned to the sport, winning the UCI World Cup race Paris-Tours in a day-long, apparently suicidal breakaway in which he finally dropped compatriot Jacky Durand and against all odds crossed the finish line just seconds ahead of the charging peloton.

While he was bested by fellow Frenchmen Laurent Jalabert in the 2002 edition of the Tour de France for the King of the Mountains competition, he won his sixth polka dot jersey in 2003 to tie the previous record of Federico Bahamontes and Lucien van Impe while riding for the new QuickStep-Davitamon team. His day-long breakaway also saw him wear the yellow jersey in the Tour de France.

In the 2004 edition he again won the "King of the Mountains" competition as best climber, establishing a record of seven times. Belgian Lucien van Impe, having himself won the classification 6 times, publicly claimed that Virenque was disrespecting the previous record holder Bahamontes and himself, and that he himself gave up the chance to break Bahamontes' previous record out of respect for Bahamontes. Virenque was further criticized for not being the best climber, and that he only specializes in day-long, suicidal breakaways to gain media exposure.

In the Tour de France Virenque has also finished twice on the final podium and won several stages, among them the legendary climb up to Mont Ventoux in 2002.

On September 24, 2004, Richard Virenque announced his retirement from competitive cycling.

On December 17, 2005, Lance Armstrong declared to Dutch newspaper Het Nieuwsblad : "I am sorry but with Virenque, we have the biggest rogue of the last 50 years in terms of doping."