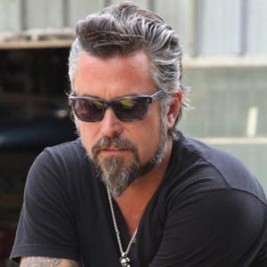 If your goal is to hire Richard Rawlings to be your next keynote speaker or to be the next brand ambassador our celebrity speakers bureau can assist. If Richard Rawlings’s booking fee is outside your companies budget or your unable to align with his appearance availability, our booking agents can provide you a list of talent that aligns with your event theme, budget and event date.

Richard Rawlings, a native of Fort Worth Texas, followed in his dad’s footsteps and developed a passion for cars from an early age, building cars and attending car shows with him. The earliest photograph of Richard, aside from his infant years, is of him sitting in a Volkswagen Beetle pedal car. His dad worked two and three jobs at a time so he could afford to have his one toy — a car or motorcycle he could call his own. Richard bought his first car when he was 14 years old: a green ’74 Mercury Comet. By the time he hit his senior year in high school, he was already on his third car, a ’77 Bandit Trans Am. Richard says he has always worked just so he could have cars. He even took a bullet in the early ’90s as he fought off a carjacker who was trying to steal his ’65 Mustang 2+2 Fastback.

Richard has held several jobs to feed his car habit. He was a firefighter, police officer and paramedic all before he was 21 years old. He eventually left those jobs to start his own business, building a printing and advertising company from the ground up. He later sold it so he could fund his next venture: Gas Monkey Garage — a world-renowned hot rod shop that has produced and shipped cars for people around the world.

A veteran of transcontinental road rallies, Richard has won the Gumball 3000 and the Bullrun — twice. He is the current world record holder in the Cannonball Run and was even recognized by Jay Leno for this achievement, having broken the record that stood since 1979. He covered the 2,811 miles from New York to Los Angeles in 31 hours and 59 minutes with an average speed of 87.6 miles per hour.

Richard says: “Bottom line, if we’re gonna have fun, it better have a motor!”