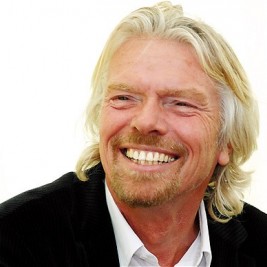 If your goal is to hire Richard Branson to be your next keynote speaker or to be the next brand ambassador our celebrity speakers bureau can assist. If Richard Branson’s booking fee is outside your companies budget or your unable to align with his appearance availability, our booking agents can provide you a list of talent that aligns with your event theme, budget and event date.

Richard Branson formed Virgin Atlantic Airways in 1984, launched Virgin Mobile in 1999, Virgin Blue in Australia in 2000, and later failed in a 2000 bid to handle the National Lottery.

Virgin has also started a European short-haul airline, Virgin Express, and a national airline based in Nigeria, called Virgin Nigeria. Another airline, Virgin America, is set to launch out of San Francisco in 2006. Branson has also developed a Virgin Cola brand, but is now retreating only to the UK market, and even a Virgin Vodka brand, which has not been an overly successful enterprise.

He became Sir Richard Branson when he was knighted by the Queen in 1999 for "services to entrepreneurship".

He has guest starred playing himself on several television shows.