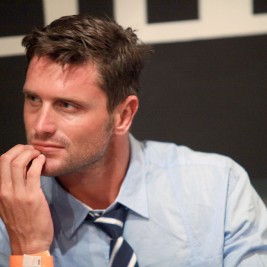 If your goal is to hire Reichen Lehmkuhl to be your next keynote speaker or to be the next brand ambassador our celebrity speakers bureau can assist. If Reichen Lehmkuhl’s booking fee is outside your companies budget or your unable to align with his appearance availability, our booking agents can provide you a list of talent that aligns with your event theme, budget and event date.

Reichen Lehmkuhl, is an American former reality show winner, model, and occasional actor. A former United States Air Force officer, he is best known for winning season four of the reality game show The Amazing Race with his then-partner Chip Arndt, and for his much publicized 2006 relationship with pop singer Lance Bass. Lehmkuhl was working simultaneously as a physics teacher at Crossroads School for the Arts and Sciences, flight instructor and model in Los Angeles when he was approached by a casting director for The Amazing Race. Lehmkuhl and Chip Arndt were a happy couple during the competition but have since split. Lehmkuhl moved to Dallas, Texas briefly after his win on The Amazing Race but before all episodes had been broadcast. Reichen's spending habits at that time caused speculation that he had won The Amazing Race — and that he and Arndt had broken up. During the show, the couple was typically described as "Married" in the subtitles that are used to illustrate the relationship between team members. Lehmkuhl had a cameo in an episode of Frasier in September 2003 as "Impossibly Handsome Man." Lehmkuhl hosted The Reichen Show on Q Television Network until Q Television ceased operations in May 2006. His autobiography Here's What We'll Say, about his time in the Air Force under the military's commonly called "Don't ask, don't tell" policy, was released by Carroll and Graf on October 28, 2006. The New York Post reported in November 2010 that the book had been adapted into a screenplay. He published a beefcake calendar for several years and has appeared on sitcoms, soap operas, and other reality television shows. On May 1, 2007, the LGBT-interest television network here! announced that Lehmkuhl had joined the cast for the third season of its original gothic soap opera, Dante's Cove. He plays the role of Trevor, originally described as "a business school graduate who comes to Dante's Cove looking to find himself."