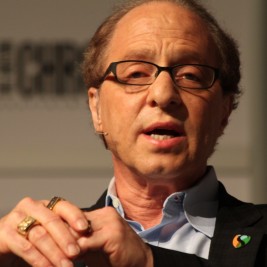 Businesses, Non-profit organizations, event planners and companies across the country have worked closely with our booking agents to hire Ray Kurzweil for a speaking engagements, guest appearances, product endorsements and corporate events. Many of those same clients have continued to turn to our speakers bureau as we can easily align Ray Kurzweil’s availability with their upcoming seminar, gala, annual conference, corporate function, and grand opening. Our close relationship with Ray Kurzweil’s booking agent and management team further enables us to provide inquiring clients with Ray Kurzweil’s speaking fee and appearance cost.

If your goal is to hire Ray Kurzweil to be your next keynote speaker or to be the next brand ambassador our celebrity speakers bureau can assist. If Ray Kurzweil’s booking fee is outside your companies budget or your unable to align with his appearance availability, our booking agents can provide you a list of talent that aligns with your event theme, budget and event date.

Ray Kurzweil was born February 12, 1948 and is an American author, inventor and futurist. He is involved in fields such as optical character recognition, text-to-speech synthesis, speech recognition technology, and electronic keyboard instruments. He is the author of several books on health, artificial intelligence, transhumanism, the technological singularity, and futurism.

Kurzweil has become something of a figurehead in some circles within the futurism and transhumanism movement, due to his public stances on life extension technologies, his claimed ability to accurately predict future technologies, and his interest in the concept of technological singularity. At the same time, he has attracted significant criticism from scientists and thinkers.

Kurzweil's central argument is derived from the predictions of Moore's Law that the rate of innovation of computer technology is increasing not linearly but rather exponentially. According to Kurzweil's argument, since growth in so many fields of science and technology depends upon computing power, these improvements translate into exponentially more frequent advances in non-computer sciences like nanotechnology, biotechnology, and materials science. Kurzweil refers to this concept as the "Law of Accelerating Returns", and has asserted that this is supported by a number of metrics.

Kurzweil's opinions on the benefits of technology for future humans are expressed further in his books. He predicted publicly that before 2050 medical advances will allow people to radically extend their lifespans while preserving and even improving quality of life as they age, due to advances in medical nanotechnology, which will allow microscopic machines to travel through one's body and repair all types of damage at the cellular level. He claims that equally consequential developments will occur within the realm of computers as they become increasingly powerful, numerous and cheap between now and 2050. Kurzweil predicts that a computer will pass the Turing test by 2029. He predicts that the first AI will be a computer simulation of a human brain which will be created thanks to hyperaccurate brainscanning done by advanced medical nanomachines inserted into a real human brain. Kurzweil suggests that AIs will inevitably become far smarter and more powerful than unenhanced humans. He also believes that AIs will exhibit moral thinking and will respect humans as their ancestors. According to his predictions, the line between humans and machines will blur as machines attain human-level intelligence and humans start upgrading themselves with cybernetic implants. These implants will greatly enhance human cognitive and physical abilities, and allow direct interface between humans and machines.