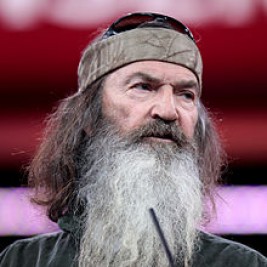 Businesses, Non-profit organizations, event planners and companies across the country have worked closely with our booking agents to hire Phil Robertson for a speaking engagements, guest appearances, product endorsements and corporate events. Many of those same clients have continued to turn to our speakers bureau as we can easily align Phil Robertson’s availability with their upcoming seminar, gala, annual conference, corporate function, and grand opening. Our close relationship with Phil Robertson’s booking agent and management team further enables us to provide inquiring clients with Phil Robertson’s speaking fee and appearance cost.

If your goal is to hire Phil Robertson to be your next keynote speaker or to be the next brand ambassador our celebrity speakers bureau can assist. If Phil Robertson’s booking fee is outside your companies budget or your unable to align with his appearance availability, our booking agents can provide you a list of talent that aligns with your event theme, budget and event date.

Phil Robertson is an American professional hunter, businessman (Duck Commander), and reality television star on the popular television series Duck Dynasty. He is also featured on the television show Buck Commander, a hunting program on the Outdoor Channel.

He attended Louisiana Tech University, where he played football, but turned down an opportunity to play professionally with the Washington Redskins. He received a master's degree in education and spent several years teaching.

Robertson was the subject of controversy after a 2013 interview he did with GQ magazine, where he said that homosexual behavior is sinful. As a result, A&E suspended him from Duck Dynasty. Facing what was reported as "a strong backlash from Robertson's supporters", A&E lifted the suspension after nine days.