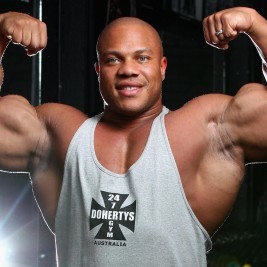 Businesses, Non-profit organizations, event planners and companies across the country have worked closely with our booking agents to hire Phil Heath for a speaking engagements, guest appearances, product endorsements and corporate events. Many of those same clients have continued to turn to our speakers bureau as we can easily align Phil Heath’s availability with their upcoming seminar, gala, annual conference, corporate function, and grand opening. Our close relationship with Phil Heath’s booking agent and management team further enables us to provide inquiring clients with Phil Heath’s speaking fee and appearance cost.

If your goal is to hire Phil Heath to be your next keynote speaker or to be the next brand ambassador our celebrity speakers bureau can assist. If Phil Heath’s booking fee is outside your companies budget or your unable to align with his appearance availability, our booking agents can provide you a list of talent that aligns with your event theme, budget and event date.

Phil Heath was born December 18, 1979 in Seattle, WA and is an American IFBB professional bodybuilder and current Mr. Olympia. He went to Rainier Beach High School and played varsity basketball. Jamal Crawford (currently plays for the Atlanta Hawks) was his teammate. Heath then played basketball for the University of Denver before turning to bodybuilding in 2002. His hard work quickly paid off when he won the overall title at the 2005 NPC (National Physique Committee) USA Championships and earned the right to compete as an IFBB Pro. "The Gift" immediately made a splash in the IFBB, winning his first two pro events in 2006, which were The Colorado Pro Championships and The New York Pro Championship. Phil placed fifth at the 2007 Arnold Classic, although fans and critics had him as high as 3rd place. Nonetheless, it qualified him to compete in the 2007 Mr. Olympia contest. Heath decided not to compete at the contest, stating that he needed more time to improve in order to be competitive. This proved to be a good move, as he ended up winning the 2008 Iron Man show and placed second to Dexter Jackson at the 2008 Arnold Classic. Phil finished 3rd in his Mr. Olympia debut in 2008, and became the first rookie to place in the top 3 since Kevin Levrone in 1992 finishing second and Flex Wheeler in 1993. He was a heavy favorite for the 2009 Mr. Olympia title but placed 5th. Phil caught a stomach virus 24 hours before the Friday pre-judging and caused him to come in to the Olympia's first day roughly 10 pounds lighter than he had planned. Phil took second place at the 2010 Mr. Olympia contest, placing second to Jay Cutler. Most recently, Phil won first place at the 2011 Mr. Olympia contest, beating Jay Cutler. Heath has been featured in many fitness and magazine articles, including being featured on the cover of FLEX magazine. Heath currently resides in Denver, Colorado, and trains at Armbrust Pro Gym in Wheat Ridge, Colorado. Phil has released three bodybuilding DVDs "The Gift", "The Gift Unwrapped", and "Journey to the Olympia."