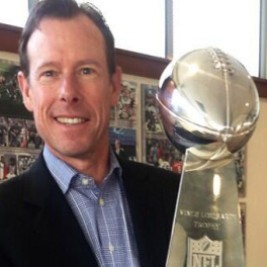 If your goal is to hire Peter McLoughlin to be your next keynote speaker or to be the next brand ambassador our celebrity speakers bureau can assist. If Peter McLoughlin’s booking fee is outside your companies budget or your unable to align with his appearance availability, our booking agents can provide you a list of talent that aligns with your event theme, budget and event date.

On September 23, 2010, Paul G. Allen announced the appointment of Peter McLoughlin as president of the Seattle Seahawks and First & Goal, Inc. McLoughlin is responsible for all financial and business operations, sales and marketing, sponsorship, and administration of the Seattle Seahawks. As president of First & Goal, he oversees management of CenturyLink Field and CenturyLink Event Center, and the Theater. He serves as the Seahawks’ representative on all NFL matters and at NFL meetings. He sits on NFL committees for Business Ventures, Stadium Security and Fan Behavior and also serves on the Digital Media Committee.