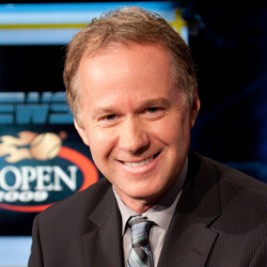 If your goal is to hire Patrick McEnroe to be your next keynote speaker or to be the next brand ambassador our celebrity speakers bureau can assist. If Patrick McEnroe’s booking fee is outside your companies budget or your unable to align with his appearance availability, our booking agents can provide you a list of talent that aligns with your event theme, budget and event date.

He  is a former professional tennis player and the former Captain of the United States Davis Cup team.

Patrick was a world-class player in his own right. He was particularly successful in doubles play, where he won 17 professional titles including the 1989 French Open men's doubles.

As a junior player, Patrick partnered with Luke Jensen to win the French Junior doubles and the USTA Boys' 18 National and Clay Court titles in 1984. He also made his first impact on the professional tour that year, teaming up with brother John to win the doubles title at Richmond, Virginia. He won the men's doubles gold medal at the 1987 Pan American Games with Jensen, and helped Stanford University win the NCAA team championship in 1986 and 1988. McEnroe graduated from Stanford in 1988 with a degree in political science, and then joined the professional tennis tour.

His first career singles final came in 1991 at Chicago, where he faced his brother John. John won the match 3-6, 6-2, 6-4. (This was the second time in tour history where two brothers faced each other in a tournament final, after Emilio S"nchez and Javier S"nchez met in the Madrid final in 1987.)

McEnroe's best Grand Slam singles performance came at the 1991 Australian Open, where he reached the semi-finals before being knocked-out by eventual-champion Boris Becker. (Commenting on his fellow semi-finalists, he told the press: "It's just like you all expected " Edberg, Lendl, McEnroe and Becker".) He was also runner-up in the men's doubles at the Australian Open that year, partnering his former Stanford team-mate David Wheaton.

McEnroe won the men's singles at the Sydney Outdoor Championships in 1995, to claim his first and only career singles title. He also had some notable Grand Slam singles results that year " beating Boris Becker in the first round of the Australian Open, and then reaching the quarter-finals of the US Open where he lost to Becker in an epic four-hour and seven-minute four-set marathon.

In the Davis Cup, Patrick represented his country as a doubles player in 1993, 1994 and 1996, compiling a 3-1 record. In 2000, after older-brother John resigned following an uphappy 14-month spell as Captain, Patrick was named the 38th Captain of the United States Davis Cup team.

Patrick has also served as a TV commentator for CBS Sports and ESPN.