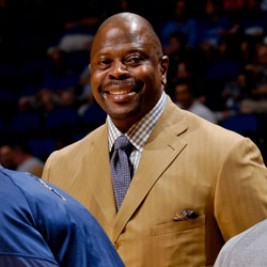 Businesses, Non-profit organizations, event planners and companies across the country have worked closely with our booking agents to hire Patrick Ewing for a speaking engagements, guest appearances, product endorsements and corporate events. Many of those same clients have continued to turn to our speakers bureau as we can easily align Patrick Ewing’s availability with their upcoming seminar, gala, annual conference, corporate function, and grand opening. Our close relationship with Patrick Ewing’s booking agent and management team further enables us to provide inquiring clients with Patrick Ewing’s speaking fee and appearance cost.

If your goal is to hire Patrick Ewing to be your next keynote speaker or to be the next brand ambassador our celebrity speakers bureau can assist. If Patrick Ewing’s booking fee is outside your companies budget or your unable to align with his appearance availability, our booking agents can provide you a list of talent that aligns with your event theme, budget and event date.

Patrick Ewing is a Jamaican-American retired Hall of Fame basketball player. He played most of his career with the NBA's New York Knicks as their starting center and played briefly with the Seattle SuperSonics and Orlando Magic. He is currently the associate head coach of the Charlotte Hornets, working under Steve Clifford.

Ewing played for the Georgetown Hoyas for four years and was named as the 16th greatest college player of all time by ESPN. He won Olympic gold medals as a member of the 1984 and 1992 United States men's Olympic basketball teams. In a 1996 poll celebrating the 50th anniversary of the NBA, Ewing was selected as one of the 50 Greatest Players in NBA History. He is a two-time inductee into the Basketball Hall of Fame in Springfield, Massachusetts (in 2008 for his individual career, and in 2010 as a member of the 1992 Olympic team). In 2009, he was inducted into the U.S. Olympic Hall of Fame as a member of the "Dream Team". He was inducted into the Hall of Fame on September 5, 2008 along with former NBA coach Pat Riley and former Houston Rockets center Hakeem Olajuwon. His number 33 was retired by the Knicks in 2003.