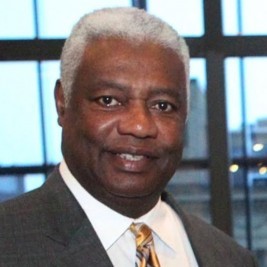 If your goal is to hire Oscar Robertson to be your next keynote speaker or to be the next brand ambassador our celebrity speakers bureau can assist. If Oscar Robertson’s booking fee is outside your companies budget or your unable to align with his appearance availability, our booking agents can provide you a list of talent that aligns with your event theme, budget and event date.

Oscar Robertson, nicknamed "The Big O", is a retired American National Basketball Association player who played for the Cincinnati Royals and Milwaukee Bucks. The 6 ft 5 in (1.96 m), 220 lb (100 kg) Robertson played the shooting guard and point guard position, and was a 12-time All-Star, 11-time member of the All-NBA Team, and one-time winner of the MVP award in 14 professional seasons. He is the only player in NBA history to average a triple-double for a season. He was a key player on the team which brought the Bucks their only NBA title in the 1970–71 NBA season. His playing career, especially during high school and college, was plagued by racism.

Robertson is a two-time Naismith Memorial Basketball Hall of Fame inductee, having been inducted in 1980 for his individual career, and in 2010 as a member of the 1960 United States men's Olympic basketball team and was president of National Basketball Players Association. He also was voted one of the 50 Greatest Players in NBA History in 1996. The United States Basketball Writers Association renamed their college Player of the Year Award the Oscar Robertson Trophy in his honor in 1998, and he was one of five people chosen to represent the inaugural National Collegiate Basketball Hall of Fame class in 2006. He was ranked as the 36th best American athlete of the 20th century by ESPN.

Robertson was also an integral part of Robertson v. National Basketball Ass'n of 1970. The landmark NBA antitrust suit, named after the then-president of the NBA Players' Association, led to an extensive reform of the league's strict free agency and draft rules and, subsequently, to higher salaries for all players.