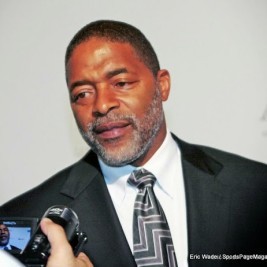 Businesses, Non-profit organizations, event planners and companies across the country have worked closely with our booking agents to hire Norm Nixon for a speaking engagements, guest appearances, product endorsements and corporate events. Many of those same clients have continued to turn to our speakers bureau as we can easily align Norm Nixon’s availability with their upcoming seminar, gala, annual conference, corporate function, and grand opening. Our close relationship with Norm Nixon’s booking agent and management team further enables us to provide inquiring clients with Norm Nixon’s speaking fee and appearance cost.

If your goal is to hire Norm Nixon to be your next keynote speaker or to be the next brand ambassador our celebrity speakers bureau can assist. If Norm Nixon’s booking fee is outside your companies budget or your unable to align with his appearance availability, our booking agents can provide you a list of talent that aligns with your event theme, budget and event date.

Norm Nixon was born October 11, 1955 in Macon, Georgia and is a retired basketball player for the NBA, who spent twelve seasons with the Los Angeles Lakers and the San Diego/Los Angeles Clippers.

Nixon was the 22nd overall pick in the 1977 NBA Draft by the Los Angeles Lakers. He played for the Lakers for six successful seasons and helped them to win NBA championships in 1980 (4-2) and 1982 (4-2), both against the Philadelphia 76ers. The same two teams would meet in the 1983 NBA Finals, but Philadelphia won this series four games to none. In the 1978 (Seattle Supersonics), 1979 (Seattle Supersonics), and 1981 (Houston Rockets) playoffs, the Lakers were eliminated by the eventual Western Conference Champion.

In game one of the 1983 finals he had a violent collision with Andrew Toney of the 76ers early in the first quarter. As he came off the floor, coach Pat Riley asked Nixon "You need a blow?", to which Nixon replied: "No, a casket". He would continue to play in game one and game two despite a separated shoulder.

Prior to the start of the 1983-84 season he was traded to the San Diego Clippers, in exchange for the draft rights to guard Byron Scott.

In his first year with the Clippers, Nixon led the league in assists and made the All-Star team for the second time in the 1984-85 season. After the 1985-86 season, he spent much of his later career on the injured list, spending more than two full seasons on the injured list before retiring for good at the end of the 1988-89 season. During he time with the Clippers he would never make it to the playoffs again. With the Clippers he averaged 9.0 assists (13.0 assists per 48 minutes), records which still stand.

He would miss the 1986-1987 season after stepping into a hole during a softball game in New York City's Central Park during the summer of 1986 (July 23, 1986) and suffered severe damage to the tendon just above his left knee. Nixon ruptured his right achilles tendon during a pre-season practice in November 4, 1987; the injury would cause him to miss the entire 1987-1988 season. Before being injured he had played in 715 of 725 games available in his first nine seasons.

During his NBA career, Nixon scored 12,065 points (15.7 points per game) and had 6,386 assists (8.3) in 768 games played. Although he had impressive statistics, he may be remembered most for faking a free throw at the end of a Lakers-San Antonio Spurs game on November 30, 1982, which caused a double lane violation. The referees erroneously ordered a jump ball, instead of requiring Nixon to re-shoot the free throw, and the end of the game was later replayed in April 1983.