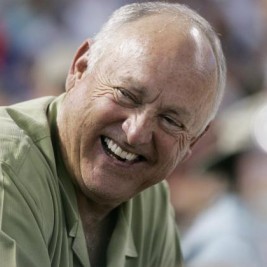 Businesses, Non-profit organizations, event planners and companies across the country have worked closely with our booking agents to hire Nolan Ryan for a speaking engagements, guest appearances, product endorsements and corporate events. Many of those same clients have continued to turn to our speakers bureau as we can easily align Nolan Ryan’s availability with their upcoming seminar, gala, annual conference, corporate function, and grand opening. Our close relationship with Nolan Ryan’s booking agent and management team further enables us to provide inquiring clients with Nolan Ryan’s speaking fee and appearance cost.

If your goal is to hire Nolan Ryan to be your next keynote speaker or to be the next brand ambassador our celebrity speakers bureau can assist. If Nolan Ryan’s booking fee is outside your companies budget or your unable to align with his appearance availability, our booking agents can provide you a list of talent that aligns with your event theme, budget and event date.

Nolan Ryan, Jr., nicknamed "The Ryan Express", is a former Major League Baseball (MLB) pitcher and a previous chief executive officer (CEO) of the Texas Rangers. He is currently an executive adviser to the owner of the Houston Astros.

During a major league record 27-year baseball career (1966, 1968–1993), he pitched for four different teams: the New York Mets, California Angels, Houston Astros, and Texas Rangers. He was inducted into the Baseball Hall of Fame in 1999.

Ryan, a hard-throwing, right-handed pitcher, threw pitches that were regularly recorded above 100 miles per hour (161 km/h). The high velocity remained throughout his career, even into his 40s. Ryan was also known to throw a devastating 12–6 curveball at exceptional velocity for a breaking ball.

While his lifetime winning percentage was .526, Ryan was an eight-time MLB All-Star, and his 5,714 career strikeouts rank first in baseball history by a significant margin. He leads the runner-up, Randy Johnson, by 839 strikeouts. Similarly, Ryan's 2,795 bases on balls lead second-place Steve Carlton by 962—walking over 50% more hitters than any other pitcher in MLB history. Ryan, Pedro Martinez, Randy Johnson, and Sandy Koufax are the only four pitchers inducted into the Baseball Hall of Fame who had more strikeouts than innings pitched. Other than Jackie Robinson (whose number was retired by the entire MLB), Ryan is currently the only major league baseball player to have his number retired by at least three different teams: the Angels, Astros, and Rangers.

Ryan is the all-time leader in no-hitters with seven, three more than any other pitcher. He is tied with Bob Feller for the most one-hitters, with 12. Ryan also pitched 18 two-hitters. Despite the seven no-hitters, he never threw a perfect game, nor did he ever win a Cy Young Award. Ryan is one of only 29 players in baseball history to have appeared in Major League baseball games in four decades and the only pitcher to have struck out seven pairs of fathers and sons.