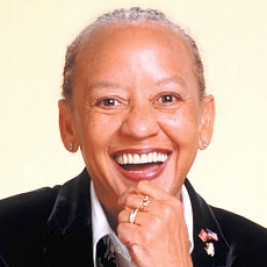 Businesses, Non-profit organizations, event planners and companies across the country have worked closely with our booking agents to hire Nikki Giovanni for a speaking engagements, guest appearances, product endorsements and corporate events. Many of those same clients have continued to turn to our speakers bureau as we can easily align Nikki Giovanni’s availability with their upcoming seminar, gala, annual conference, corporate function, and grand opening. Our close relationship with Nikki Giovanni’s booking agent and management team further enables us to provide inquiring clients with Nikki Giovanni’s speaking fee and appearance cost.

If your goal is to hire Nikki Giovanni to be your next keynote speaker or to be the next brand ambassador our celebrity speakers bureau can assist. If Nikki Giovanni’s booking fee is outside your companies budget or your unable to align with his appearance availability, our booking agents can provide you a list of talent that aligns with your event theme, budget and event date.

One of the most widely-read American poets, she prides herself on being "a Black American, a daughter, a mother, a professor of English." Giovanni remains as determined and committed as ever to the fight for civil rights and equality. Always insisting on presenting the truth as she sees it, she has maintained a prominent place as a strong voice of the Black community. Her focus is on the individual, specifically, on the power one has to make a difference in oneself, and thus, in the lives of others.

She was born in Knoxville, Tennessee, and grew up in Lincoln Heights, an all-black suburb of Cincinnati, Ohio. She and her sister spent their summers with their grandparents in Knoxville, and she graduated with honors from Fisk University, her grandfather's alma mater, in 1968; after graduating from Fisk, she attended the University of Pennsylvania and Columbia University. She published her first book of poetry, Black Feeling Black Talk, in 1968, and within the next year published a second book, thus launching her career as a writer. Early in her career she was dubbed the "Princess of Black Poetry," and over the course of more than three decades of publishing and lecturing she has come to be called both a "National Treasure" and, most recently, one of Oprah Winfrey's twenty-five "Living Legends."

Many of Giovanni's books have received honors and awards. Her autobiography, Gemini, was a finalist for the National Book Award; Love Poems, Blues: For All the Changes, and Quilting the Black-Eyed Pea were all honored with NAACP Image Awards. Blues: For All the Changes reached #4 on the Los Angeles Times Bestseller list, a rare achievement for a book of poems. Most recently, her children's picture book Rosa, about the civil rights legend Rosa Parks, became a Caldecott Honors Book, and Bryan Collier, the illustrator, was given the Coretta Scott King award for best illustration. Rosa also reached #3 on The New York Times Bestseller list.

Giovanni's spoken word recordings have also achieved widespread recognition and honors. Her album Truth Is On Its Way, on which she reads her poetry against a background of gospel music, was a top 100 album and received the Best Spoken Word Album given by the National Association of Radio and Television Announcers. Her Nikki Giovanni Poetry Collection, on which she reads and talks about her poetry, was one of five finalists for a Grammy Award.

Giovanni's honors and awards have been steady and plentiful throughout her career. The recipient of some twenty-five honorary degrees, she has been named Woman of the Year by Mademoiselle Magazine, The Ladies Home Journal, and Ebony Magazine. She was tapped for the Ohio Women's Hall of Fame and named an Outstanding Woman of Tennessee. Giovanni has also received Governor's Awards from both Tennessee and Virginia. She was the first recipient of the Rosa L. Parks Woman of Courage Award, and she has also been awarded the Langston Hughes Medal for poetry. She is an honorary member of Delta Sigma Theta Sorority and has received Life Membership and Scroll from The National Council of Negro Women. A member of PEN, she was honored for her life and career by The History Makers. She has received the keys to more than two dozen cities. A scientist who admires her work even named a new species of bat he discovered for her!

The author of some 30 books for both adults and children, Nikki Giovanni is a University Distinguished Professor at Virginia Tech in Blacksburg, Virginia.