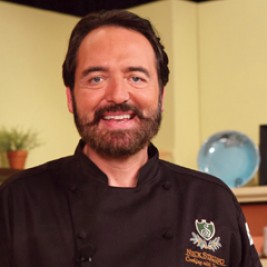 Businesses, Non-profit organizations, event planners and companies across the country have worked closely with our booking agents to hire Nick Stellino for a speaking engagements, guest appearances, product endorsements and corporate events. Many of those same clients have continued to turn to our speakers bureau as we can easily align Nick Stellino’s availability with their upcoming seminar, gala, annual conference, corporate function, and grand opening. Our close relationship with Nick Stellino’s booking agent and management team further enables us to provide inquiring clients with Nick Stellino’s speaking fee and appearance cost.

If your goal is to hire Nick Stellino to be your next keynote speaker or to be the next brand ambassador our celebrity speakers bureau can assist. If Nick Stellino’s booking fee is outside your companies budget or your unable to align with his appearance availability, our booking agents can provide you a list of talent that aligns with your event theme, budget and event date.

Nick Stellino grew up in Palermo, on the island of Sicily, and came to the United States in 1975. In 1991, he decided to leave his lucrative career as a Wall Street stockbroker in order to follow his dream of becoming a chef. He started his culinary career as a dishwasher. Over time, he apprenticed with the best chefs in America. "I was in heaven working at working my way through the restaurant line," says Nick Stellino. "But I wanted to share my enthusiasm for Italian cooking with more people. I decided a cooking show was the answer." Employing the energy, dedication and entrepreneurial vision that had taken him from Palermo to Wall Street, Nick began calling television production companies. His efforts culminated in the highly successful series Cucina Amore I, II, and III, Nick Stellino's Family Kitchen I, II, III, IV and V, and the PBS specials, Nick Stellino's Dinner Party and Nick Stellino: Food, Love & Family.

Nick has published many cookbooks and has partnered with major publishing companies including Putnam and Doubleday. In 2006 Nick celebrated the launch of his seventh cookbook titled "Dine In," which is the companion to his PBS television show, Nick Stellino's Family Kitchen.