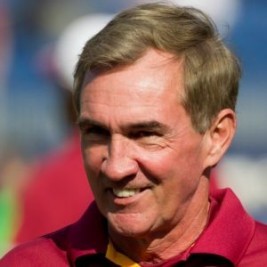 Businesses, Non-profit organizations, event planners and companies across the country have worked closely with our booking agents to hire Mike Shanahan for a speaking engagements, guest appearances, product endorsements and corporate events. Many of those same clients have continued to turn to our speakers bureau as we can easily align Mike Shanahan’s availability with their upcoming seminar, gala, annual conference, corporate function, and grand opening. Our close relationship with Mike Shanahan’s booking agent and management team further enables us to provide inquiring clients with Mike Shanahan’s speaking fee and appearance cost.

If your goal is to hire Mike Shanahan to be your next keynote speaker or to be the next brand ambassador our celebrity speakers bureau can assist. If Mike Shanahan’s booking fee is outside your companies budget or your unable to align with his appearance availability, our booking agents can provide you a list of talent that aligns with your event theme, budget and event date.

Mike Shanahan is that lightning rod for the Denver Broncos championship history, and few coaches in NFL annals have spearheaded as much dramatic achievement.

The Broncos stand as the perfect symbol of a team manifesting the personality of its head coach--maintaining discipline, focus, preparation, mental toughness, and physical effort, all qualities indelibly stamped onto the franchise by Head Coach/Vice President of Football Operations Shanahan, whose superb guidance directed the Broncos to victory in Super Bowls XXXII and XXXIII.

The architect of San Francisco's offense in the 49ers' 1994 World Championship season, Shanahan not only can boast of three titles in the six years, but he is one of only 11 coaches ever to win Super Bowls with two different clubs.

Shanahan received a scholarship to Eastern Illinois University, where he played quarterback and lost a kidney in a spring game of his junior year, which began his coaching career a year earlier than was intended. Shanahan also received his bachelor's and master's degrees at EIU.

He began his coaching career at Oklahoma in 1975-76, serving as an assistant coach for the Sooners, and they won the national championship in his first year on their staff (1975). Shanahan was Northern Arizona's backfield coach in 1977 at the age of 24, and the Lumberjacks averaged a school-record 391.1 yards that season.

Mike moved on to Florida the following year, inheriting the second poorest offense in Division I football, as well as a team record of 0-10-1. In Mike's four years the team broke many offensive school records and went to four straight bowl games. During his stint at the college coaching level, his teams had a combined record of 77-29-3.

Recognized as one of the most dynamic offensive minds in the game, Shanahan thus was an assistant coach in college at age 21, an offensive coordinator at the Division I level by 25 and at the NFL level at 32 in his first Denver stint.