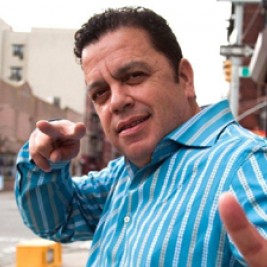 Businesses, Non-profit organizations, event planners and companies across the country have worked closely with our booking agents to hire Mike Robles for a speaking engagements, guest appearances, product endorsements and corporate events. Many of those same clients have continued to turn to our speakers bureau as we can easily align Mike Robles’s availability with their upcoming seminar, gala, annual conference, corporate function, and grand opening. Our close relationship with Mike Robles’s booking agent and management team further enables us to provide inquiring clients with Mike Robles’s speaking fee and appearance cost.

If your goal is to hire Mike Robles to be your next keynote speaker or to be the next brand ambassador our celebrity speakers bureau can assist. If Mike Robles’s booking fee is outside your companies budget or your unable to align with his appearance availability, our booking agents can provide you a list of talent that aligns with your event theme, budget and event date.

He serves as the host of the music television series "Video Mix," seen nationally on Galavision, the leading Hispanic cable network in the U.S. Mike can also be seen as one of the rotating hosts on Galavision's "Que Locos," a showcase for Latin stand-up comedians.

Robles is no stranger to television; in the 1980s he hosted his own one-hour comedy/variety show, "Comedy Picante," on a local Bronx television network. This was followed by the cult-cable access show, "Comedy Rhumba," which aired on Manhattan cable television and was the recipient of two Cable Ace award nominations for "Best Local Programming for Comedy/Variety Show." The success of the television shows led to Mike hosting "Comedy Rhumba Live," a monthly SRO engagement at Caroline's Comedy Club in New York City. This enormous popularity resulted in Mike's hosting duties for Galavision and the national "Que Locos" tour.

Mike has created a loyal following that continues to grow. He has received many distinguished awards for his achievements in the Hispanic community, and has been praised by local politicians and entertainers for being a role model to young Latinos. The NY Daily News summed it up best: "Not since Prinze's reign has a Latino comic turned so many heads."