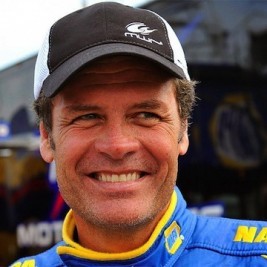 If your goal is to hire Michael Waltrip to be your next keynote speaker or to be the next brand ambassador our celebrity speakers bureau can assist. If Michael Waltrip’s booking fee is outside your companies budget or your unable to align with his appearance availability, our booking agents can provide you a list of talent that aligns with your event theme, budget and event date.

Michael Waltrip is an American professional stock car racing driver, co-owner of Michael Waltrip Racing, racing commentator, and published author. He is the younger brother of three-time NASCAR champion and racing commentator Darrell Waltrip. Waltrip is a two-time winner of the Daytona 500; having won the race in 2001 and 2003. He is also a pre-race analyst for NASCAR on FOX. He is a part-time driver in the NASCAR Sprint Cup Series mainly competing in races at Daytona and Talladega. He also competed in the 2011 edition of 24 Hours of Le Mans. At 6 foot, 5 inches, he is the tallest active NASCAR driver.

When not racing, he is a commentator alongside his older brother Darrell for NASCAR on Fox. On September 4, 2014, Waltrip was announced as one of the celebrities who would participate on the 19th season of Dancing with the Stars. He was paired with professional dancer Emma Slater. They were eliminated on November 3, 2014.

Waltrip wrote a book published in 2011 called In the Blink of an Eye: Dale, Daytona, and the Day that Changed Everything. It became a New York Times best-seller.