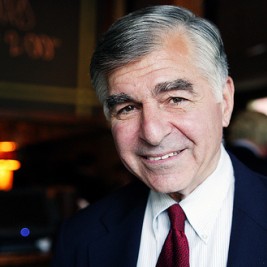 If your goal is to hire Michael Dukakis to be your next keynote speaker or to be the next brand ambassador our celebrity speakers bureau can assist. If Michael Dukakis’s booking fee is outside your companies budget or your unable to align with his appearance availability, our booking agents can provide you a list of talent that aligns with your event theme, budget and event date.

Michael Dukakis is an American politician who served as the 65th and 67th Governor of Massachusetts. He is the longest-serving Governor in Massachusetts history and only the second Greek American Governor in U.S. history, after Spiro Agnew. In 1988, he was the Democratic nominee for President, but lost to the Republican candidate, Vice President George H. W. Bush.

Dukakis went on to serve three terms as governor of Massachusetts (1975-78, 1983-1990), interrupting his last to run as the Democratic nominee for president against Republican George Bush. Perhaps his most memorable visit to UCLA came during the 1988 race, when he and Bush staged the first of their televised debates in Pauley Pavilion -- what some analysts consider a pivotal point in the campaign.

Dukakis has been a distinguished professor of political science at Northeastern University in Boston since 1991. Formerly a lecturer and director of intergovernmental studies at Harvard's John F. Kennedy School of Government, he has also served as a visiting professor or guest lecturer at Rutgers University, Florida Atlantic University and the University of Hawaii.