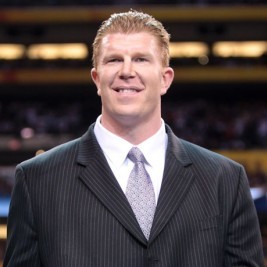 Businesses, Non-profit organizations, event planners and companies across the country have worked closely with our booking agents to hire Matt Birk for a speaking engagements, guest appearances, product endorsements and corporate events. Many of those same clients have continued to turn to our speakers bureau as we can easily align Matt Birk’s availability with their upcoming seminar, gala, annual conference, corporate function, and grand opening. Our close relationship with Matt Birk’s booking agent and management team further enables us to provide inquiring clients with Matt Birk’s speaking fee and appearance cost.

If your goal is to hire Matt Birk to be your next keynote speaker or to be the next brand ambassador our celebrity speakers bureau can assist. If Matt Birk’s booking fee is outside your companies budget or your unable to align with his appearance availability, our booking agents can provide you a list of talent that aligns with your event theme, budget and event date.

Matt Birk was born July 23, 1976 and is a former American football center. He was drafted by the Minnesota Vikings in the sixth round of the 1998 NFL Draft, and later played for the Baltimore Ravens. He played college football at Harvard. Birk is a two-time All-Pro and six-time Pro Bowl selection, and a Super Bowl Champion.

Ranked as the No. 16 offensive tackle available, Birk was drafted by the Minnesota Vikings in the 6th round of the 1998 NFL Draft. He was described by Sports Illustrated as "maybe the best Ivy League prospect to come along in several years", who "could be a nice developmental type pick". Birk was the first Harvard Crimson lineman to be selected in an NFL draft since Roger Caron in 1985.

During his first two seasons with the Vikings, he appeared in 22 games as a backup offensive lineman. In 2000, he took over the starting center position for the Vikings, starting all 16 games and was named to his first Pro Bowl team. Birk started every game for the Vikings at center from 2000-2003.

On July 10, 2014, Birk was named the NFL director of football development