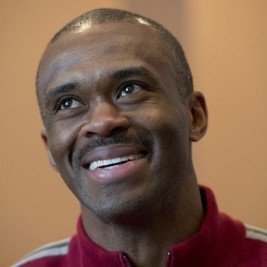 If your goal is to hire Marvin Harrison to be your next keynote speaker or to be the next brand ambassador our celebrity speakers bureau can assist. If Marvin Harrison’s booking fee is outside your companies budget or your unable to align with his appearance availability, our booking agents can provide you a list of talent that aligns with your event theme, budget and event date.

One the best receivers in NFL History, playing his entire career with the Indianapolis Colts, Marvin Harrison was born August 25, 1972, in Philadelphia, Pennsylvania. He played his college career for Syracuse University and was drafted in the first round, pick 19 in 1996 with the Indianapolis Colts. He is a graduate of Roman Catholic High School located in Center City, Philadelphia, Harrison has been placed among the top wide receivers statistically since entering the league and won his first Super Bowl in 2007.

Marvin owns numerous NFL receiving records, averaging 86 receptions per season, just ahead of second place Sterling Sharpe who averaged 85 receptions per season. He had previously been averaging 93 per season until 2007, where he missed the majority of games with a knee injury, resulting in a 20 reception season. Harrison holds the record for most receptions in a single season with 143, crushing the previous record of 123 set by Herman Moore. He is the only player to have four consecutive 100 or more reception seasons in NFL history and became the only player ever in the history of the NFL to have six double digit reception games in one single season in the 2002 regular season.

On December 10, 2006, Harrison made his 1000th reception against the Jacksonville Jaguars. He is among only 4 other players in NFL history to have over 1000 receptions, with the other 3 being Jerry Rice, Cris Carter, and Tim Brown. Marvin Harrison and Peyton Manning hold the record for most receptions between a QB and a WR with 723 receptions.