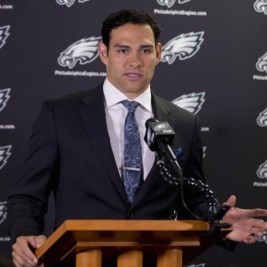 Businesses, Non-profit organizations, event planners and companies across the country have worked closely with our booking agents to hire Mark Sanchez for a speaking engagements, guest appearances, product endorsements and corporate events. Many of those same clients have continued to turn to our speakers bureau as we can easily align Mark Sanchez’s availability with their upcoming seminar, gala, annual conference, corporate function, and grand opening. Our close relationship with Mark Sanchez’s booking agent and management team further enables us to provide inquiring clients with Mark Sanchez’s speaking fee and appearance cost.

If your goal is to hire Mark Sanchez to be your next keynote speaker or to be the next brand ambassador our celebrity speakers bureau can assist. If Mark Sanchez’s booking fee is outside your companies budget or your unable to align with his appearance availability, our booking agents can provide you a list of talent that aligns with your event theme, budget and event date.

Mark Sanchez is an American football quarterback for the Philadelphia Eagles of the National Football League. He was drafted in the first round of the 2009 NFL Draft as the fifth overall pick by the New York Jets. He played college football at the University of Southern California (USC). Sanchez grew up in a well-disciplined and athletic family. In the eighth grade, he began to play football and learn the intricacies of the quarterback position, training with his father, Nick. A well-regarded prospect, Sanchez committed to Southern California following his successful high school career in which he led his team to a championship title during his final season. At USC, Sanchez was relegated as the backup quarterback during his first three years though he rose to prominence due to his brief appearances on the field in 2007 due to injuries suffered by starting quarterback John David Booty. Sanchez also became popular within the community due to his Mexican-American heritage. Named the starter in 2008, Sanchez led USC to a 12–1 record and won the Rose Bowl against Penn State for which Sanchez was awarded the Most Valuable Player award for his performance on offense.

Although USC coach Pete Carroll and many scouts considered him too inexperienced, Sanchez announced his intention to enter the 2009 NFL Draft. He was selected by the Jets after they traded up with the Cleveland Browns, and was named the starting quarterback prior to the start of the season. Despite a subpar performance, Sanchez led the Jets to the AFC Championship Game, a losing effort to the Indianapolis Colts, becoming the fourth rookie quarterback in NFL history to win his first playoff game and the second to win two playoff games. In his second season, Sanchez continued to develop and led the Jets to the playoffs and the team's second consecutive AFC Championship Game where they narrowly lost to the Pittsburgh Steelers, 24–19. With the win over the New England Patriots the week prior, Sanchez tied four other quarterbacks for the second most post-season road victories by a quarterback in NFL history. In leading the Jets to two consecutive conference championships, Sanchez joined quarterback Ben Roethlisberger as the only two quarterbacks in NFL history to reach the conference championship in their first two seasons in the league.