Search Mark Grimmette
American Luger who Competed from 1990 to 2010 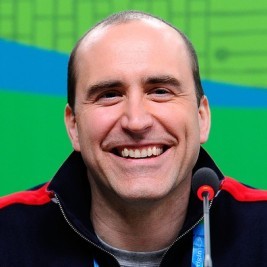 Businesses, Non-profit organizations, event planners and companies across the country have worked closely with our booking agents to hire Mark Grimmette for a speaking engagements, guest appearances, product endorsements and corporate events. Many of those same clients have continued to turn to our speakers bureau as we can easily align Mark Grimmette’s availability with their upcoming seminar, gala, annual conference, corporate function, and grand opening. Our close relationship with Mark Grimmette’s booking agent and management team further enables us to provide inquiring clients with Mark Grimmette’s speaking fee and appearance cost.

If your goal is to hire Mark Grimmette to be your next keynote speaker or to be the next brand ambassador our celebrity speakers bureau can assist. If Mark Grimmette’s booking fee is outside your companies budget or your unable to align with his appearance availability, our booking agents can provide you a list of talent that aligns with your event theme, budget and event date.

Mark Grimmette was born January 23, 1971 in Muskegon, Michigan and is an American luger who competed from 1990 to 2010. Competing in five Winter Olympics, he won two medals in the men's doubles event with a silver in 2002 and a bronze in 1998.

Grimmette carried the United States flag during the opening ceremony of the 2010 Winter Olympics in Vancouver.

He announced his retirement in March of 2010.

On 29 April 2010, it was announced that Grimmette was named USA Luge's Sports Program Director and also was involved as a head coach.