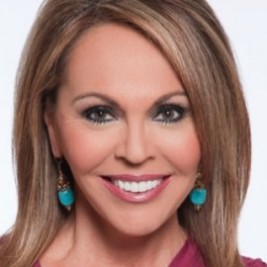 If your goal is to hire Maria Elena Salinas to be your next keynote speaker or to be the next brand ambassador our celebrity speakers bureau can assist. If Maria Elena Salinas’s booking fee is outside your companies budget or your unable to align with his appearance availability, our booking agents can provide you a list of talent that aligns with your event theme, budget and event date.

Univision Network Anchor María Elena Salinas is the most recognized Hispanic female journalist in the United States. Called by The New York Times, “the voice of Hispanic America,” Salinas has informed millions of Hispanics in the United States and 18 countries in Latin America for 3 decades. As co-anchor of the highly rated “Noticiero Univision” and the primetime news magazine “Aqui y Ahora” (Here and Now), Salinas has handled some of the most challenging assignments in modern day journalism.

Salinas’ work has earned her several journalistic awards including three national and one regional Emmys. She was also part of the Univision news team that received the Edward R. Murrow Award for the network’s coverage of the Atlanta Olympic Park bombings. She has interviewed every U.S. President since Jimmy Carter and has been face to face with dozens of Latin American heads of state, rebel leaders, and dictators. In 2007 Salinas made history co-hosting the first ever Democratic and Republican presidential candidate Forums in Spanish on the Univision Network.

Her influence reaches beyond television. She is a radio analyst on Latino issues and is one of few Hispanic syndicated columnists in the United States, where her column is published in both Spanish and English, as well as on Univision.com and her own web site/blog MariaESalinas.com. In 2006, her memoir entitled “I Am My Father’s Daughter: Living A Life Without Secrets” was published, receiving critical acclaim and making the best seller lists for Spanish-language books on several occasions.

Salinas is also the official spokesperson for “Ya es Hora” (It’s Time), a national citizenship and civic engagement campaign, that received the coveted Peabody Award for helping motivate Hispanics to participate in the American political dialogue. In 2000, Salinas launched a scholarship in her name to be awarded to a Hispanic journalism student interested in pursuing a career in Spanish language media. She is one of the founding members of the National Association of Hispanic Journalists and sits on the board of the Hispanic Scholarship Fund and the International Women’s Media Foundation.

Salinas began her journalistic career as a reporter for KMEX-34 television in Los Angeles in 1981. Her insightful reporting on the impact of daily news to increasingly growing Hispanic community of Southern California quickly earned her the credibility that would lead to her assuming the anchor chair of Noticiero Univision in 1987.

Since then her brand of journalism has earned her dozens of awards and recognition from important groups such as the Mexican-American Legal Defense and Educational Fund, the National Association of Latino Elected and Appointed Officials, The Congressional Hispanic Caucus Institute and the National Organization for Women that honored her with the coveted Intrepid Award.

Salinas was born in Los Angeles to Mexican immigrant parents, where she began her broadcasting career. She resides in Coral Gables, Florida, with her two daughters, Julia Alexandra and Gabriela María.