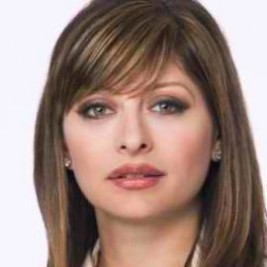 If your goal is to hire Maria Bartiromo to be your next keynote speaker or to be the next brand ambassador our celebrity speakers bureau can assist. If Maria Bartiromo’s booking fee is outside your companies budget or your unable to align with his appearance availability, our booking agents can provide you a list of talent that aligns with your event theme, budget and event date.

"The Wall Street Journal Report with Maria Bartiromo" is a nationally syndicated business, financial and economic news program, distributed by NBC Universal Domestic Television Distribution. The half-hour weekly newscast appears on over 200 stations each week and provides the clarity, depth and insight of The Wall Street Journal in a television magazine format.

In 1995, Bartiromo became the first journalist to report live from the floor of the New York Stock Exchange on a daily basis where she covered breaking news for the network's unscripted and fast-paced business morning program, "Squawk Box."

Bartiromo joined CNBC in 1993 after five years as a producer and assignment editor with CNN Business News. She has anchored the television coverage of New York City's world famous Columbus Day Parade since 1995. In 2004, Bartiromo was honored with The Union League of Philadelphia's prestigious Lincoln Statue Award, for significant contributions to the United States of America. In 1996, Bartiromo was nominated for a CableACE Award for her three-part series on the Internet and its implications for investors. In 1997, she received the Coalition of Italo-American Associations' Excellence in Broadcast Journalism Award. In 2002, Bartiromo was nominated for a Gerald Loeb Award for Distinguished Business and Financial Journalism for her piece on the widows of September 11. In May 2008, Bartiromo received a Gracie Award in the category of Outstanding Documentary for her documentary "Greenspan: Power, Money & the American Dream." She was also awarded a News and Documentary Emmy in 2008 for her "Bailout Talks Collapse" coverage and a second News and Documentary Emmy in 2009 for her report on "Inside the Mind of Google." In December 2009, Bartiromo was featured in the Financial Times as one of the "50 Faces that Shaped the Decade." She will be inducted into the Cable Hall of Fame Class of 2011, acknowledging her dedication to and impact on the cable industry.

She has written a weekly column for BusinessWeek and Milano Finanza, as well as monthly columns for Individual Investor, Ticker and Reader's Digest magazines, and she has been published in the Financial Times, Newsweek, Town and Country, Registered Rep and the New York Post. HarperCollins published her book, "Use the News: How to Separate the Noise from the Investment Nuggets and Make Money in Any Economy" in June 2001. The book was on the bestseller lists of The New York Times, The Wall Street Journal and USA Today. Bartiromo's second book, "The 10 Laws of Enduring Success" was released by Crown Business, a division of Random House, Inc., in late March 2010. Her latest book, "The Weekend That Changed Wall Street" was released by Portfolio / Penguin in early September 2010.

In addition to being a member of the Board of Trustees of New York University, Bartiromo is on the Board of Directors of the New York City Ballet, the Girl Scout Council of Greater New York; as well as PENCIL, Public Education Needs Civic Involvement and Leadership, which is a non-profit group focusing on improving New York high schools. She is a Young Global Leader of the World Economic Forum. She is also a member of The Council on Foreign Relations, The Economic Club of New York, and the Board of Governors of the Columbus Citizens Foundation.

Bartiromo graduated from New York University, where she majored in journalism and minored in economics.