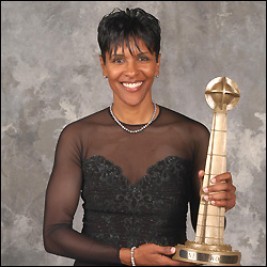 If your goal is to hire Lynette Woodard to be your next keynote speaker or to be the next brand ambassador our celebrity speakers bureau can assist. If Lynette Woodard’s booking fee is outside your companies budget or your unable to align with his appearance availability, our booking agents can provide you a list of talent that aligns with your event theme, budget and event date.

As a junior at Wichita North High School, Lynette Woodard was asked by the school's basketball head coach to join the school's varsity team. She declined, but she kept practicing her game, and, at age sixteen, the five foot eleven inch teenager joined the team.

Woodard went on to play college basketball with the University of Kansas (KU) in 1978, playing there until 1981. She was a four time All-American at KU, and she averaged 26 points per game and 3,649 points in total during her four years there.

In 1984, she was a member of the United States' women's basketball team that won the Gold Medal at the Los Angeles Olympic Games.

In 1985, Woodard made headlines when she became the first woman ever to play with the Globetrotters. The news coverage of this event gave her much attention, and the fact that she travelled to many countries worldwide with the Globetrotters, helped women's professional teams from many different parts of the world take notice.

Incidentally, Woodard's cousin, Hubert "Geese" Ausbie, also played for the Globetrotters from 1961 to 1985.

In 1997, she was signed by the Cleveland Rockers of the newly-founded Women's National Basketball Association (WNBA). The following year, she was selected in an expansion draft by the Detroit Shock. During the WNBA's off-season, she began working as a stockbroker in New York City.

She retired from playing in 1999, and returned to the University of Kansas serving as the Assistant Coach of the women's basketball team. In late January 2004, she was named Interim Head Coach filling for the regular coach Marian Washington, who had retired due to medical reasons.

She also served as Athletics Director for the Kansas City, Missouri School District from 1992 to 1994.

Woodard now works as a financial consultant for A.G. Edwards & Sons Inc., in her hometown of Wichita, Kansas.