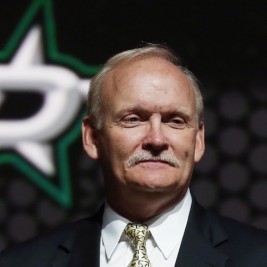 Businesses, Non-profit organizations, event planners and companies across the country have worked closely with our booking agents to hire Lindy Ruff for a speaking engagements, guest appearances, product endorsements and corporate events. Many of those same clients have continued to turn to our speakers bureau as we can easily align Lindy Ruff’s availability with their upcoming seminar, gala, annual conference, corporate function, and grand opening. Our close relationship with Lindy Ruff’s booking agent and management team further enables us to provide inquiring clients with Lindy Ruff’s speaking fee and appearance cost.

If your goal is to hire Lindy Ruff to be your next keynote speaker or to be the next brand ambassador our celebrity speakers bureau can assist. If Lindy Ruff’s booking fee is outside your companies budget or your unable to align with his appearance availability, our booking agents can provide you a list of talent that aligns with your event theme, budget and event date.

Lindy Ruff was born February 17, 1960 in Warburg, Alberta and is head coach of the Dallas Stars and former defenceman in the National Hockey League. Ruff is known for being blunt with the media. A well-known example of his bluntness were his comments regarding Toronto Maple Leafs player Darcy Tucker. In his post-game interview following a questionable hit on Jochen Hecht that knocked the Sabres centre out of the lineup for two weeks with a sprained ACL in the 2005-06 season, Ruff said, "I want him [Tucker] suspended." He also said, "I have not called the NHL office all year and I will call them ten times tomorrow." He called Tucker's hit "a definition of a joke." On April 5, 2006, Ruff became the 31st coach in NHL history to win 300 games, and just the 16th to do it with only one team. Ruff led the Sabres to their most successful regular season ever in 2006-2007, with a 53-22-7 record for a total of 113 points. Ruff was the winner of the 2005-06 Jack Adams Award for coach of the year in the National Hockey League. Tom Renney of the New York Rangers and Peter Laviolette of the Carolina Hurricanes were also nominated. In the 2006-07 season he became the first Sabres coach to lead the team to back-to-back 50 win seasons, boasting the 5th best win percentage in terms of points captured vs. points available from 1979-present for the entire league. On October 15, 2008, Ruff became the 23rd coach in NHL history to win 400 games, and just the 7th to win 400 games for one team. Ruff ranks 19th in the history of the NHL with 438 regular season coaching wins. His 52 career playoff wins are tied for 15th place on the all-time list. Among coaches with 40 or more playoff wins, Ruff is in the top 6 in terms of career winning percentage. Ruff was named as an associate coach for Team Canada for the 2010 Olympics in Vancouver.