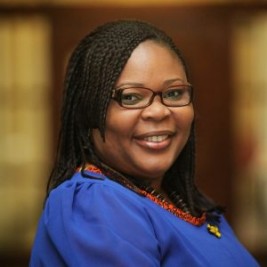 Businesses, Non-profit organizations, event planners and companies across the country have worked closely with our booking agents to hire Leymah Gbowee for a speaking engagements, guest appearances, product endorsements and corporate events. Many of those same clients have continued to turn to our speakers bureau as we can easily align Leymah Gbowee’s availability with their upcoming seminar, gala, annual conference, corporate function, and grand opening. Our close relationship with Leymah Gbowee’s booking agent and management team further enables us to provide inquiring clients with Leymah Gbowee’s speaking fee and appearance cost.

If your goal is to hire Leymah Gbowee to be your next keynote speaker or to be the next brand ambassador our celebrity speakers bureau can assist. If Leymah Gbowee’s booking fee is outside your companies budget or your unable to align with his appearance availability, our booking agents can provide you a list of talent that aligns with your event theme, budget and event date.

Leymah Gbowee received the Nobel Peace Prize in 2011 for her work in leading a women’s peace movement that brought an end to the Second Liberian Civil War in 2003. Gbowee shared the prize with fellow Liberian Ellen Johnson Sirleaf and Yemen-native Tawakkol Karman. Gbowee and Sirleaf became the second and third African women to win the prize, preceded by the late Wangari Maathai of Kenya.

Leymah is the founder and president of Gbowee Peace Foundation Africa based in Liberia. Her foundation provides educational and leadership opportunities to girls, women and youth in West Africa.

Leymah was born in central Liberia in 1972. She was living with her parents and sisters in Liberia’s capital, Monrovia, when the First Liberian Civil War erupted. She recalls clearly the day the first Liberian civil war came to her doorstep. “All of a sudden one July morning I wake up at 17, going to the university to fulfill my dream of becoming a medical doctor, and fighting erupted.”

Witnessing the effects of war on Liberians, she decided to train as a trauma counsellor to treat former child soldiers.

A second civil war broke out in 1999 and brought systematic rape and brutality to an already war-weary Liberia. Responding to the conflict, Leymah mobilized an interreligious coalition of Christian and Muslim women and organized the Women of Liberia Mass Action for Peace movement.  Through Leymah’s leadership, thousands of women staged pray-ins and nonviolent protests demanding reconciliation and the resuscitation of high-level peace talks. The pressure pushed President Charles Taylor into exile, and smoothed the path for the election of Africa’s first female head of state, fellow 2011 Nobel Laureate Ellen Johnson Sirleaf. Documenting these efforts in the Tribeca Film Festival 2008 Best Documentary winner Pray the Devil Back to Hell, Leymah demonstrated the power of social cohesion and relationship-building in the face of political unrest and social turmoil.

In 2007, Leymah earned a Master’s degree in Conflict Transformation from Eastern Mennonite University in the United States. Meanwhile, she continued to build women’s agency in fighting for sustainable peace.  She is a founding member and former coordinator for Women in Peacebuilding/West African Network for Peacebuilding (WIPNET/WANEP). She also co-founded the Women Peace and Security Network Africa (WIPSEN-Africa) to promote cross-national peace-building efforts and transform women’s participation as victims in the crucible of war to mobilized armies for peace.

Ever-focused on sustaining peace, Leymah continued working on behalf of grassroots efforts in her leadership positions. She served as a member of both the African Feminist Forum and the African Women’s Leadership Network on Sexual and Reproductive Rights, and as a commissioner-designate for the Liberia Truth and Reconciliation Commission.  Through these positions, Leymah addressed the particular vulnerability of women and children in war-torn societies.

In her current position as President of Gbowee Peace Foundation Africa, Leymah pushes for greater inclusion of women as leaders and agents of change in Africa.

Since winning the Nobel Peace Prize, Leymah travels internationally to speak about the pernicious and devastating effects of war and gender-based violence. She has been featured on a number of international television programmes including CNN, BBC and France24, and speaks internationally advocating for women’s high level inclusion in conflict-resolution. She has received several honorary degrees from universities, and is a Global Ambassador for Oxfam.

She serves on the Board of Directors of the Nobel Women’s Initiative, Gbowee Peace Foundation and the PeaceJam Foundation, and she is a member of the African Women Leaders Network for Reproductive Health and Family Planning. She has received honorary degrees from Rhodes University in South Africa, the University of Alberta in Canada, Polytechnic University in Mozambique, and University of Dundee in Scotland. After receiving the Barnard College Medal of Distinction in 2013, she was named a Distinguished Fellow in Social Justice. Leymah is the proud mother of six children.

When asked how she first found the courage to become a peace activist, Leymah explained: “When you’ve lived true fear for so long, you have nothing to be afraid of. I tell people I was 17 when the war started in Liberia. I was 31 when we started protesting.  I have taken enough dosage of fear that I have gotten immune to fear.”