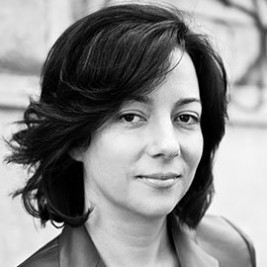 Businesses, Non-profit organizations, event planners and companies across the country have worked closely with our booking agents to hire Kim Ghattas for a speaking engagements, guest appearances, product endorsements and corporate events. Many of those same clients have continued to turn to our speakers bureau as we can easily align Kim Ghattas’s availability with their upcoming seminar, gala, annual conference, corporate function, and grand opening. Our close relationship with Kim Ghattas’s booking agent and management team further enables us to provide inquiring clients with Kim Ghattas’s speaking fee and appearance cost.

If your goal is to hire Kim Ghattas to be your next keynote speaker or to be the next brand ambassador our celebrity speakers bureau can assist. If Kim Ghattas’s booking fee is outside your companies budget or your unable to align with his appearance availability, our booking agents can provide you a list of talent that aligns with your event theme, budget and event date.

Kim Ghattas brings a fresh voice to the debate about American power and US diplomacy and strives to make international affairs accessible to a general audience by humanizing the discussion, including by telling her own story.

Half Lebanese and half Dutch, a French and Arabic speaker, she grew up in Beirut during the civil war, witnessing firsthand the consequences of foreign policy decisions made in Washington.

After reporting on the Middle East for a decade, she came to the U.S. in 2008 as the BBC's State Department correspondent and got to see the other side of the story, with a front row seat to U.S diplomacy.

Her background gave her a unique perspective as she covered the last year of Condoleezza Rice at the State Department and then spent four years criss-crossing the globe to report on the tenure of Hillary Clinton. Ghattas travelled three hundred thousand miles around the world with Clinton and interviewed her nineteen times, witnessing close-up the transformation of Hillary Clinton from politician to stateswoman.

In her New York Times best selling book, The Secretary: A Journey with Hillary Clinton, From Beirut to the Heart of American Power, Ghattas provides the first in-depth account of Clinton as Secretary of State and uses her unique perspective to deliver an engaging portrait, not only of America's diplomat-in-chief, but also of America as a superpower in a challenging, multipolar world. Ghattas' book is full of real people who bring the story to life for a wide audience, as she takes the readers inside the Saudi King's desert retreat, a heroin's home in Ragoon and the Secretary of State's ageing Boeing 757.

Ghattas' motivation to write the book stemmed from her desire to understand the world around her and explain it to others. She decided to become a journalist at the age of 13, just as Lebanon was emerging from conflict. She pursued her dream with determination, and while still in college, she started interning for a local paper and soon began working for foreign media. As a foreign correspondent for the BBC, the Dutch national daily de Volkskrant and the Financial Times, she covered the Middle East extensively for a decade - from the death of Hafez el Assad in Syria to life under sanctions in Iraq during the rule of Saddam Hussein, from the fall of Baghdad to the spate of terror attacks in Saudi Arabia, the Syrian occupation of Lebanon and the Beirut Spring. She was part of an Emmy Award–winning BBC team covering the Lebanon- Israel conflict in 2006. Her work has also been published in Time magazine, the Boston Globe, the Washington Post, and she appears regularly on NPR radio and American television shows as a commentator.