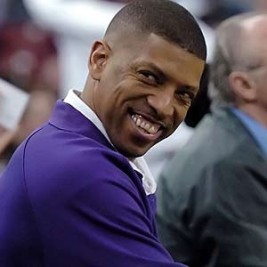 Businesses, Non-profit organizations, event planners and companies across the country have worked closely with our booking agents to hire Kevin Johnson for a speaking engagements, guest appearances, product endorsements and corporate events. Many of those same clients have continued to turn to our speakers bureau as we can easily align Kevin Johnson’s availability with their upcoming seminar, gala, annual conference, corporate function, and grand opening. Our close relationship with Kevin Johnson’s booking agent and management team further enables us to provide inquiring clients with Kevin Johnson’s speaking fee and appearance cost.

If your goal is to hire Kevin Johnson to be your next keynote speaker or to be the next brand ambassador our celebrity speakers bureau can assist. If Kevin Johnson’s booking fee is outside your companies budget or your unable to align with his appearance availability, our booking agents can provide you a list of talent that aligns with your event theme, budget and event date.

Kevin Johnson is the current mayor of Sacramento, the capital city of the U.S. state of California. Elected in 2008 and re-elected in 2012, Johnson is the first African American to serve in that office. Prior to entering politics, Johnson was a professional basketball player in the National Basketball Association (NBA), playing point guard for the Cleveland Cavaliers and the Phoenix Suns.

During his 12-year playing career, Johnson was a three-time NBA All-Star and four-time second team All-NBA selection, along with holding numerous records for the Phoenix Suns organization. At the University of California, Berkeley, Johnson was named a two-time All-Pac-10 Conference player and an honorable-mention All-American by the Associated Press.

Johnson has a B.A. in Political Science from U.C. Berkeley that he completed after his initial retirement from the NBA. Since founding St. HOPE in 1989, Johnson has been active in education reform. As Mayor, Johnson launched two education initiatives, Stand UP and Sacramento READS!, to benefit students in Sacramento. Johnson also helped to save the Sacramento Kings basketball team from moving to Anaheim, and later, Seattle

Before becoming the mayer, Johnson was President of two corporations, Kevin Johnson currently concentrates on business opportunities and community involvement both in Sacramento, California and Phoenix, Arizona.

In Sacramento, Johnson managed St. HOPE Corporation ("SHC"), a non-profit community development corporation designed to expand economic, educational and social opportunities that lead to the revitalization of inner-city communities. Affiliated with SHC are six other separately incorporated non-profit entities, all founded by Johnson and all working in concert to achieve his inner-city objectives.

In Phoenix, as President and CEO of The Kevin Johnson Corporation, Johnson oversees the operations of several subsidiary organizations specializing in real estate development and management, sports management and business acquisition. A key component of The Kevin Johnson Corporation includes appearances and public speaking engagements for corporations, academic institutions and community organizations.