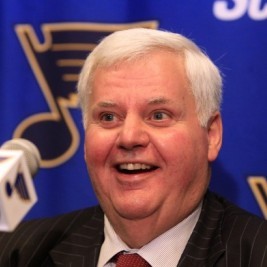 Businesses, Non-profit organizations, event planners and companies across the country have worked closely with our booking agents to hire Ken Hitchcock for a speaking engagements, guest appearances, product endorsements and corporate events. Many of those same clients have continued to turn to our speakers bureau as we can easily align Ken Hitchcock’s availability with their upcoming seminar, gala, annual conference, corporate function, and grand opening. Our close relationship with Ken Hitchcock’s booking agent and management team further enables us to provide inquiring clients with Ken Hitchcock’s speaking fee and appearance cost.

If your goal is to hire Ken Hitchcock to be your next keynote speaker or to be the next brand ambassador our celebrity speakers bureau can assist. If Ken Hitchcock’s booking fee is outside your companies budget or your unable to align with his appearance availability, our booking agents can provide you a list of talent that aligns with your event theme, budget and event date.

Head coach of the St Louis Blues, Ken Hitchcock began his coaching career during the 1984-85 season where he was coach of the Kamloops Blazers of the Western Hockey League. Hitchcock spent six seasons with the Blazers, leading them to two WHL championship victories in 1985-86 and 1989-90. During his tenure with the Blazers, Hitchcock accumulated a 291-115-15 record and never had a losing season. He also named the Top Coach in all of Canadian Major Junior Hockey in 1990.

In 1990, Hitchcock left the WHL and joined the Philadelphia Flyers as an assistant coach. Hitchcock spent three seasons with the Flyers organization before leaving to helm the Dallas Stars' IHL franchise, the Kalamazoo Wings, for the 1993-94 season.

In the middle of his third season with the team (now called the Michigan K-Wings), he was offered the head coaching position with the Dallas Stars and on January 8, 1996, he was named head coach, replacing Bob Gainey, who remained with the Stars as general manager. In his first full season with the Stars, he led the team to a first-place finish in the Central Division and a playoff berth. In his second full season with the Stars, Hitchcock again led the Stars to the playoffs, losing in the Conference Finals to the eventually victorious Detroit Red Wings. Also during the 1997-98 season, Hitchcock was named to his first of three consecutive NHL All-Star Game teams as coach.

In the 2000-01 season, Hitchcock again led the Stars to the playoffs, but exited early. Midway through the following season, after getting off to a mediocre 23-21-6 start and in the midst of strife between the players and management, Hitchcock was fired as head coach.

Hitchcock was quickly picked up in the off-season by his old team, the Philadelphia Flyers, who had just fired their coach, Bill Barber, after an early exit from the playoffs. Hitchcock brought much-needed discipline and direction to the Flyers and led them to a 45-24-13 record in his first season, losing in the Conference Semi-finals.

In Hitchcock's second season with the Flyers, the Flyers finished first in the division with a 40-21-15 record and advanced to the Conference Finals against the Tampa Bay Lightning.

In his spare time Hitchcock is a history buff and participates in American Civil War re-enactments.