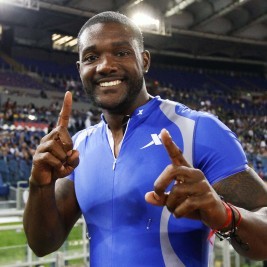 Businesses, Non-profit organizations, event planners and companies across the country have worked closely with our booking agents to hire Justin Gatlin for a speaking engagements, guest appearances, product endorsements and corporate events. Many of those same clients have continued to turn to our speakers bureau as we can easily align Justin Gatlin’s availability with their upcoming seminar, gala, annual conference, corporate function, and grand opening. Our close relationship with Justin Gatlin’s booking agent and management team further enables us to provide inquiring clients with Justin Gatlin’s speaking fee and appearance cost.

If your goal is to hire Justin Gatlin to be your next keynote speaker or to be the next brand ambassador our celebrity speakers bureau can assist. If Justin Gatlin’s booking fee is outside your companies budget or your unable to align with his appearance availability, our booking agents can provide you a list of talent that aligns with your event theme, budget and event date.

Justin Gatlin  is an American sprinter, who is an Olympic gold medalist in the 100-meter dash. His 100m personal best is 9.74 seconds. He is a twice World indoor champion in the 60-meter dash.

In 2001, he incurred a two-year ban from Athletics for testing positive for a banned substance; the ban was later reduced to one year on appeal.

In 2006, he incurred a four-year ban from track and field for testing positive for a banned substance, with this sanction erasing his then-world-record time of 9.77s in the 100m. Gatlin began competing again in August 2010, soon after his eligibility was reinstated. In June 2012 at the US Olympic trials, Gatlin ran a time of 9.80s, which was the fastest-ever time for a man over the age of 30.