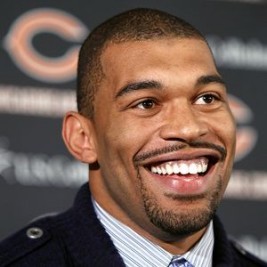 Businesses, Non-profit organizations, event planners and companies across the country have worked closely with our booking agents to hire Julius Peppers for a speaking engagements, guest appearances, product endorsements and corporate events. Many of those same clients have continued to turn to our speakers bureau as we can easily align Julius Peppers’s availability with their upcoming seminar, gala, annual conference, corporate function, and grand opening. Our close relationship with Julius Peppers’s booking agent and management team further enables us to provide inquiring clients with Julius Peppers’s speaking fee and appearance cost.

If your goal is to hire Julius Peppers to be your next keynote speaker or to be the next brand ambassador our celebrity speakers bureau can assist. If Julius Peppers’s booking fee is outside your companies budget or your unable to align with his appearance availability, our booking agents can provide you a list of talent that aligns with your event theme, budget and event date.

Julius Peppers was born January 18, 1980, nicknamed The Freak Of Nature, is a defensive end for Green Bay Packers of the National Football League (NFL). He played college football for the University of North Carolina, and was recognized as an All-American. The Carolina Panthers selected him with the second overall pick in the 2002 NFL Draft where he played his first eight seasons.

On March 5, 2010, the Chicago Bears signed Peppers to a six-year contract worth $91.5 million, with $42 million guaranteed in the first three years. Peppers made an immediate impact in Week 1 vs. the Detroit Lions. He forced a Matthew Stafford fumble with 29 seconds to go in the first half. The strip-sack also injured Stafford. In Week 5, Peppers went back home to play the Carolina Panthers. His biggest play of the game was when he tipped a Jimmy Clausen pass and proceeded to intercept it, by diving underneath the ball. He finished the year with fifty four tackles, eight sacks and two interceptions. His impact was most felt with regards to putting pressure on opposing quarterbacks, redirecting running plays, or assisting on the tackle. Peppers finished fourth in voting for the NFL's 2010 AP Defensive Player of the Year Award, which was won by Pittsburgh Steelers safety Troy Polamalu.

Peppers improved on his 2010 season in 2011 starting all 16 games and leading the Bears defense with 11 sacks despite facing constant double teams, while collecting 37 tackles (33 solo), and forcing 3 fumbles. Peppers was awarded the NFC Defensive player of the month award for November as he collected 6 tackles, 4 sacks, and 3 pass breakups. In Week 17 facing the Vikings, Peppers was awarded a .5 sack by the league, that he originally split with Matt Toeaina, giving him his 100th career sack making him the twenty eighth player in NFL history to achieve that milestone. For his efforts Peppers was elected to the 2012 Pro Bowl for his fourth consecutive year. In the 2012 season, Peppers played with plantar fasciitis, though he was able to record 11.5 sacks in the season, becoming the first Bears player to record ten sacks or more in back-to-back years since Rosevelt Colvin. He was named to the 2013 Pro Bowl, his fifth consecutive.