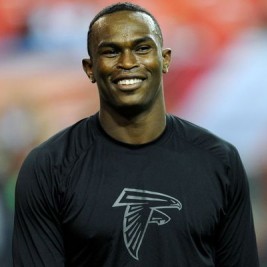 Businesses, Non-profit organizations, event planners and companies across the country have worked closely with our booking agents to hire Julio Jones for a speaking engagements, guest appearances, product endorsements and corporate events. Many of those same clients have continued to turn to our speakers bureau as we can easily align Julio Jones’s availability with their upcoming seminar, gala, annual conference, corporate function, and grand opening. Our close relationship with Julio Jones’s booking agent and management team further enables us to provide inquiring clients with Julio Jones’s speaking fee and appearance cost.

If your goal is to hire Julio Jones to be your next keynote speaker or to be the next brand ambassador our celebrity speakers bureau can assist. If Julio Jones’s booking fee is outside your companies budget or your unable to align with his appearance availability, our booking agents can provide you a list of talent that aligns with your event theme, budget and event date.

Julio Jones was born February 3, 1989 and is an American football wide receiver for the Atlanta Falcons of the National Football League (NFL). He was drafted by the Falcons with the sixth overall pick in the 2011 NFL Draft. He played college football for the Alabama Crimson Tide. During his sophomore season with Alabama in 2009, he helped lead the Tide to an undefeated 14-0 season including a victory in the 2010 BCS National Championship Game.

The Atlanta Falcons selected Jones with the sixth overall pick of the 2011 NFL Draft. Atlanta had traded five draft picks to the Cleveland Browns to move up into their spot and take Jones, giving up their 27th, 59th, and 124th picks from the 2011 draft, and their first and fourth round picks from the 2012 draft. Jones wears number 11, in tribute to the year he was drafted into the NFL. Jones came to terms with the Falcons on July 28, 2011, signing a four-year contract worth $16.2 million, all of which was guaranteed. In addition, Jones earns income from an endorsement deal he signed with Under Armour.

Jones recorded his first NFL touchdown on Week 9 of the 2011 season, against the Indianapolis Colts. He finished the season leading all rookies in touchdown receptions with 8, while his 54 receptions for 959 yards ranked him second among rookies in yardage and touchdowns, behind A. J. Green and third in catches behind Green and Greg Little.

In 2012, the Falcons went 13-3 with the #1 seed in the NFC. In the divisional playoff game versus the Seattle Seahawks, Jones recorded his first career interception. Jones has been playing free safety on opposing Hail Mary pass attempts.