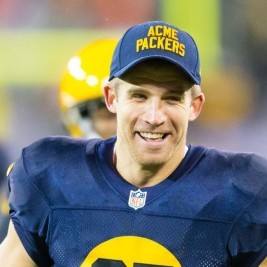 Businesses, Non-profit organizations, event planners and companies across the country have worked closely with our booking agents to hire Jordy Nelson for a speaking engagements, guest appearances, product endorsements and corporate events. Many of those same clients have continued to turn to our speakers bureau as we can easily align Jordy Nelson’s availability with their upcoming seminar, gala, annual conference, corporate function, and grand opening. Our close relationship with Jordy Nelson’s booking agent and management team further enables us to provide inquiring clients with Jordy Nelson’s speaking fee and appearance cost.

If your goal is to hire Jordy Nelson to be your next keynote speaker or to be the next brand ambassador our celebrity speakers bureau can assist. If Jordy Nelson’s booking fee is outside your companies budget or your unable to align with his appearance availability, our booking agents can provide you a list of talent that aligns with your event theme, budget and event date.

Jordy Nelson was born May 31, 1985 and is a wide receiver for the Green Bay Packers of the National Football League (NFL). He played college football for Kansas State University, and received All-American honors. Nelson was drafted in the second round of the 2008 NFL Draft, and has played professionally for the Packers.

In the 2010 season he set career-highs in receiving yards (582) and catches (45), while catching 2 touchdown passes for the third straight year. Following the injury to Aaron Rodgers against the Detroit Lions on December 12, 2010, it was revealed that Nelson also serves as the Packers' emergency/third string quarterback.

Building on strong outings in the 2010-11 playoffs against Atlanta and Chicago, Nelson caught a 29-yard touchdown pass on third-and-1 with William Gay covering, for the first score of Super Bowl XLV. "This was Jordy last week: 'I think we need to convert on third downs to win the game.' ... Rodgers threw a terrific pass,capping an 80-yard touchdown drive," a live-blog reported. In the balance of the game, Nelson struggled some and made no more touchdowns. However, he recovered from a dropped pass early in the fourth quarter to make a 38-yard play on the next down, taking the Packers to the Steelers' two-yard line. Nelson was the top receiver of the game with 9 receptions for 140 yards (both career highs), while also gaining 19 more yards on a kick return.

Nelson finished the 2011-12 regular season with career highs in touchdowns (15), receptions (68), and receiving yards (1,263). He had a career high 3 TD receptions in the season finale against the Detroit Lions, and moved into sole possession of 3rd place for most receiving TDs in a single season in Packers franchise history, behind only Sterling Sharpe (18) and Don Hutson (17). In the midst of his breakout season, Nelson signed a three year, $13.35 million contract extension on October 2nd.