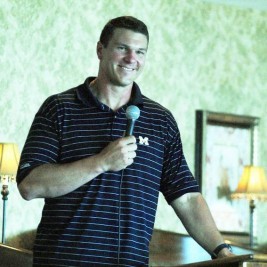 Businesses, Non-profit organizations, event planners and companies across the country have worked closely with our booking agents to hire Jon Jansen for a speaking engagements, guest appearances, product endorsements and corporate events. Many of those same clients have continued to turn to our speakers bureau as we can easily align Jon Jansen’s availability with their upcoming seminar, gala, annual conference, corporate function, and grand opening. Our close relationship with Jon Jansen’s booking agent and management team further enables us to provide inquiring clients with Jon Jansen’s speaking fee and appearance cost.

If your goal is to hire Jon Jansen to be your next keynote speaker or to be the next brand ambassador our celebrity speakers bureau can assist. If Jon Jansen’s booking fee is outside your companies budget or your unable to align with his appearance availability, our booking agents can provide you a list of talent that aligns with your event theme, budget and event date.

Born on January 28, 1976, Jon Jansen is an American football offensive tackle. At the moment he is a free agent. He played for the Detroit Lions and Washington Redskins of the National Football League in the past. During the 1999 NFL, he was drafted by the Washington Redskins. In college, Jansen was a two-time First-Team All-Big Ten selection at Michigan. He set a school record with 50 straight starts, all at Right Tackle, earning the nickname "Rock." In 1998, he was named a First-Team All-American by the Burger King American Football Coaches Association. His professional career started when he got drafted by Washington Redskins during the 1999 NFL Draft. His teammates voted him as the 'Unsung Hero' of the Redskins for 2002. He was considered as the best tackles in the NFL and part of the best bookend tandem of tackles. He was given a new contract in 2007 at the conclusion of the 2006 season after his injury. In 2009, he was released from the Washington Redskins. After his career from Washington, the Detroit Lions agrees to a one-year deal with him. He played for the team and this was his first start for the Lions in a game against the Pittsburgh Steelers. He was then released from the Lions the following year. He made appearance in 2006 at the HBO show Costas Now as he was being interviewed by the host of the program. He joined the NFL Network Coverage of the playoff game between Philadelphia Eagles and Minnesota Vikings in 2009 and he was hired for a variety of roles by the Big Ten Network.