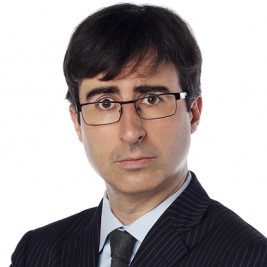 Businesses, Non-profit organizations, event planners and companies across the country have worked closely with our booking agents to hire John Oliver for a speaking engagements, guest appearances, product endorsements and corporate events. Many of those same clients have continued to turn to our speakers bureau as we can easily align John Oliver’s availability with their upcoming seminar, gala, annual conference, corporate function, and grand opening. Our close relationship with John Oliver’s booking agent and management team further enables us to provide inquiring clients with John Oliver’s speaking fee and appearance cost.

If your goal is to hire John Oliver to be your next keynote speaker or to be the next brand ambassador our celebrity speakers bureau can assist. If John Oliver’s booking fee is outside your companies budget or your unable to align with his appearance availability, our booking agents can provide you a list of talent that aligns with your event theme, budget and event date.

John Oliver was born in Birmingham, UK. In 1998 he graduated from Christ's College, Cambridge. Oliver first appeared at the Edinburgh Festival Fringe in 2001 as part of "The Comedy Zone," a late-night showcase of newer acts. He performed his debut solo show in 2002 and returned in 2003.

In 2004 and 2005, he collaborated with Andy Zaltzman on a double act and co-hosting "Political Animal," with various acts performing political material. Jon Stewart was apparently told about Oliver by a friend, the English comic Ricky Gervais, whom Oliver did not know.

Oliver joined "The Daily Show with Jon Stewart" as its Senior British Correspondent in July 2006. "I've always striven to be both an entertainer and an irritant. I think that's why I feel so at home on 'The Daily Show,'" quipped Oliver in a January 2009 interview. The writers of "The Daily Show" won an Emmy in 2009 for "Best Comedy Writing In A Comedy or Variety Series."

Outside of "The Daily Show," Oliver appeared in a recurring role on the NBC comedy "Community" as Dr. Ian Duncan, a psychology professor, from 2009-2011. He also co-hosted "The Bugle," a weekly satirical comedy podcast with Andy Zaltzman.

Oliver lives in New York City with his wife, an Iraq War veteran.