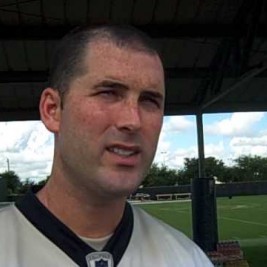 If your goal is to hire John David Booty to be your next keynote speaker or to be the next brand ambassador our celebrity speakers bureau can assist. If John David Booty’s booking fee is outside your companies budget or your unable to align with his appearance availability, our booking agents can provide you a list of talent that aligns with your event theme, budget and event date.

John David Booty was born January 3, 1985, in Shreveport, Louisiana and is an American football quarterback for the Tennessee Titans of the National Football League. He is currently on their practice squad. He was drafted by the Minnesota Vikings in the fifth round of the 2008 NFL Draft. He played college football at USC. He is the brother of former Seattle Seahawks, Cleveland Browns, and Oakland Raiders backup quarterback Josh Booty.

Booty is the younger brother of former Cleveland Browns and Oakland Raiders quarterback Josh Booty (who threw for 3,951 yards and 24 touchdowns during two years with LSU's football team) and former LSU and Valdosta State University wide receiver Abram Booty (who caught 117 passes for 1,768 yards during three years at LSU). Josh also played baseball for the Florida Marlins. He is from the same hometown as Terry Bradshaw, Tommy Maddox and Art Carmody. Booty was high school backfield mates with former LSU and current San Diego Chargers runningback Jacob Hester. Booty was roommates with then-USC center Ryan Kalil during the 2006 season. He is sometimes called "J.D.". Booty married his fianceé Jill in July of 2009.