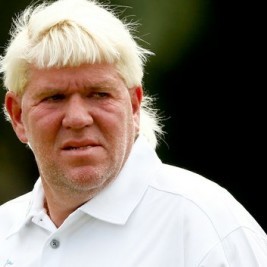 Businesses, Non-profit organizations, event planners and companies across the country have worked closely with our booking agents to hire John Daly for a speaking engagements, guest appearances, product endorsements and corporate events. Many of those same clients have continued to turn to our speakers bureau as we can easily align John Daly’s availability with their upcoming seminar, gala, annual conference, corporate function, and grand opening. Our close relationship with John Daly’s booking agent and management team further enables us to provide inquiring clients with John Daly’s speaking fee and appearance cost.

If your goal is to hire John Daly to be your next keynote speaker or to be the next brand ambassador our celebrity speakers bureau can assist. If John Daly’s booking fee is outside your companies budget or your unable to align with his appearance availability, our booking agents can provide you a list of talent that aligns with your event theme, budget and event date.

John Patrick Daly is an American professional golfer on the PGA Tour.

Daly is known primarily for his driving distance off the tee (earning him the nickname "Long John"), his non-country club appearance and attitude, and his rough-and-tumble personal life. His two greatest on course accomplishments are his "zero to hero" victory in the 1991 PGA Championship, and his playoff victory over Costantino Rocca in the 1995 Open Championship.

According to official performance statistics kept since 1980, Daly in 1997 became the first PGA Tour player to average more than 300 yards per drive over a full season. He did so again in every year from 1999 to 2008, and he was the only player to do so until 2003.[2]

Daly's last PGA Tour victory came in San Diego in 2004, earning him a two-year playing exemption. After 2006, Daly's career began to falter and he had trouble making cuts and staying on the PGA Tour. He was primarily earning entry through past champion status and numerous sponsor invitations.

Daly is the only man from either Europe or the United States to win two major golf championships but not participate in the Ryder Cup.

Daly has been successful in multiple businesses. He has a "Loud Mouth" line of clothing and a golf course design company. In addition, Daly has written and recorded music and released two music albums.