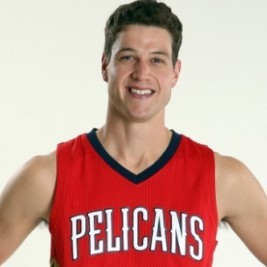 If your goal is to hire Jimmer Fredette to be your next keynote speaker or to be the next brand ambassador our celebrity speakers bureau can assist. If Jimmer Fredette’s booking fee is outside your companies budget or your unable to align with his appearance availability, our booking agents can provide you a list of talent that aligns with your event theme, budget and event date.

Jimmer Fredette was born February 25, 1989 and is an American basketball player. He plays shooting guard and was named the 2011 NCAA men's basketball player of the year by the Associated Press, Basketball Times, CBSSports.com, the National Association of Basketball Coaches, SI.com, and Sporting News, as well as the winner of the Naismith Award and the Adolph Rupp and Oscar Robertson trophies.

Fredette was born and grew up in Glens Falls, New York, and earned several accolades for his basketball performance in high school, including being named to ESPN's Top 75 shooting guards. Fredette was recruited by 12 schools for collegiate play and elected to attend Brigham Young University. He set several university, conference, and NCAA records while a member of the BYU Cougars men's basketball team, including becoming the Mountain West Conference's all-time leading scorer. His senior year of college, Fredette led the nation in scoring and competed with his team in the NCAA Tournament's Sweet Sixteen. He is a likely pick in the 2011 NBA Draft.

After BYU's nationally televised game against San Diego State in which Fredette scored 43 points, the media attention around Jimmer became significant. Fredette gained "pop culture lore," and his name became a verb�opponents on whom he scored large amounts of points were considered "Jimmered." His image appeared in on one of the regional covers for Sports Illustrated for the 2011 NCAA tournament preview issue.

YouTube became replete with highlight reels and songs about Fredette (e.g., "Teach Me How to Jimmer"); and in February 2011 BYU student Michelle Peralta, who chastised people for "worshiping" Jimmer via the campus newspaper and Facebook, was inundated by comments from hundreds of Fredette supporters, the popular media declaring that "Michelle Peralta got Jimmered."