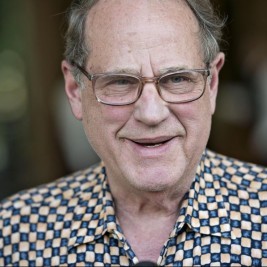 If your goal is to hire Jerry Reinsdorf to be your next keynote speaker or to be the next brand ambassador our celebrity speakers bureau can assist. If Jerry Reinsdorf’s booking fee is outside your companies budget or your unable to align with his appearance availability, our booking agents can provide you a list of talent that aligns with your event theme, budget and event date.

Jerry M. Reinsdorf is a CPA, lawyer and an owner of the NBA's Chicago Bulls and the MLB's Chicago White Sox. He started his professional life as a tax attorney with the Internal Revenue Service. He has been the head of the White Sox and Bulls for over 25 years.

He made his initial fortune in real estate, taking advantage of the Frank Lyon Co. v. United States decision by the United States Supreme Court which allowed economic owners of realty to sell property and lease it back, while transferring the tax deduction for depreciation to the title owner.

As the owner and Chairman of the Chicago Bulls since 1985, he has turned the franchise into a lucrative business that won six NBA Championships in the 1990s (1991–1993 and 1996–1998). He is controversial for his involvement (along with Jerry Krause) in breaking up the championship team by not hiring back key personnel such as Phil Jackson and Michael Jordan. He hired Jordan as a baseball player during his sabbatical from basketball. He also moved the Bulls from Chicago Stadium to the United Center.

As a baseball owner since 1981, he has brought success to the White Sox franchise. The franchise made the playoffs in 1983 for the first time since 1959 and won the World Series in 2005 for the first time since 1917. He moved the White Sox from Comiskey Park to New Comiskey Park and then renamed the new park U.S. Cellular Field. In both sporting endeavors, he has developed a reputation as an anti-labor union hardliner. Since the early 1990s, he has been considered one of the most, if not the most, influential basketball owners. He has been influential in instituting the salary cap and revenue sharing.