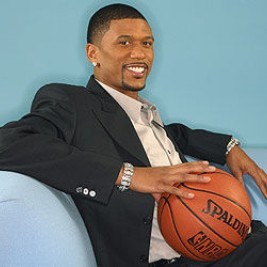 Businesses, Non-profit organizations, event planners and companies across the country have worked closely with our booking agents to hire Jalen Rose for a speaking engagements, guest appearances, product endorsements and corporate events. Many of those same clients have continued to turn to our speakers bureau as we can easily align Jalen Rose’s availability with their upcoming seminar, gala, annual conference, corporate function, and grand opening. Our close relationship with Jalen Rose’s booking agent and management team further enables us to provide inquiring clients with Jalen Rose’s speaking fee and appearance cost.

If your goal is to hire Jalen Rose to be your next keynote speaker or to be the next brand ambassador our celebrity speakers bureau can assist. If Jalen Rose’s booking fee is outside your companies budget or your unable to align with his appearance availability, our booking agents can provide you a list of talent that aligns with your event theme, budget and event date.

Jalen Rose was born January 30, 1973 and is a retired American professional basketball player and current sports analyst for the television network ESPN. In college, he was a member of the University of Michigan Wolverines' "Fab Five" (along with Chris Webber, Juwan Howard, Jimmy King, and Ray Jackson) that reached the 1992 and 1993 NCAA Men's Division I Basketball Championship games as both Freshmen and Sophomores. Rose played in the NBA for six teams, most notably alongside Reggie Miller on the Indiana Pacers teams that made three consecutive Eastern Conference finals, including the 2000 NBA Finals.

Rose played for six different NBA teams, forging a solid pro career after skipping his senior season at Michigan. He was selected 13th overall by the Denver Nuggets in the 1994 NBA Draft. After two years with Denver, he was traded to the Indiana Pacers, along with Reggie Williams and a future first round draft pick, for Mark Jackson, Ricky Pierce, and a 1st round draft pick.

Despite his successes in Indiana, he was never readily accepted early on. Rose frequently logged DNPCDs (Did Not Play - Coach's Decision) under Coach Larry Brown. Rose also often spoke out about the fact he was being used as a backup two-guard and small forward over his preference, which was point guard. It was not until Larry Bird took over coaching duties did Rose finally begin to blossom, eventually realizing he was most effective at small forward.

Rose's greatest moments as a pro occurred as a member of the Indiana Pacers, as he helped the team get back on its feet after a disastrous 1996–97 season and make it to three consecutive Eastern Conference Finals appearances. Rose became the first player in eight years other than Reggie Miller to lead the Pacers in scoring in the 1999–2000 season when he averaged 18.2 points per game for the eventual Eastern Conference Champions. After helping lead his team to the 2000 NBA Finals, Rose went on to average 25 points per game in the six game series, including a 32-point effort in a game five win. However, the Pacers lost the series to the Los Angeles Lakers.

During the 2001–02 season, Rose was traded to the Chicago Bulls along with Travis Best, Norman Richardson, and a future second round draft pick in exchange for Brad Miller, Ron Mercer, Ron Artest and Kevin Ollie.

After 16 games in the 2003–04 season, Rose was traded to the Toronto Raptors, along with power forwards Donyell Marshall and Lonny Baxter. Jalen Rose found moderate success with the Raptors, but the team soon decided to rebuild.
Rose in 2006 as a member of the New York Knicks.

On February 3, 2006, midway through the 2005–06 campaign, he was traded, along with a first-round draft pick, and an undisclosed sum of cash (believed to be around $3 million), to the New York Knicks for Antonio Davis, where he was reunited with Larry Brown, his coach for one year with the Indiana Pacers. The motivation behind this trade was apparently to free up cap space (Rose earned close to $18 million a year) as well as for the Raptors to acquire an experienced center who could relieve some of Chris Bosh's rebounding duties. Rose's final game and contribution for the Raptors was a home win against the Sacramento Kings, where he scored the winning basket in overtime.

Rose's tenure with the Knicks was uneventful and prior to the start of the 2006–07 NBA season on October 30, 2006, the Knicks cut ties with Rose by waiving him. He was courted by several teams including the Phoenix Suns, Detroit Pistons and Miami Heat.

On November 3, 2006, Rose announced he would sign with the Suns on his blog at jalenrose.com. On November 7, it was officially announced that Rose had signed a $1.5 million one-year deal with Phoenix.