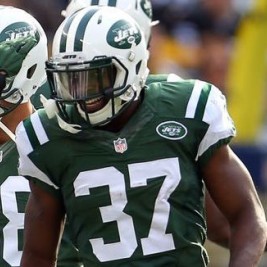 If your goal is to hire Jaiquawn Jarrett to be your next keynote speaker or to be the next brand ambassador our celebrity speakers bureau can assist. If Jaiquawn Jarrett’s booking fee is outside your companies budget or your unable to align with his appearance availability, our booking agents can provide you a list of talent that aligns with your event theme, budget and event date.

Jaiquawn Jarrett is an American football safety for the New York Jets of the National Football League (NFL). He was drafted by the Philadelphia Eagles in the second round of the 2011 NFL Draft. He played college football at Temple.

Jarrett signed a future/reserve contract with the New York Jets on December 31, 2012. Jarrett entered the 2013 preseason competing with Antonio Allen for the starting free safety job. Jarret had his breakout performance against the Steelers in 2014, earning 2 interceptions, 10 tackles, a sack, and a fumble recovery. In 2015 Jaiquawn Jarrett signed a 1 year, $1,542,000 contract with the New York Jets.